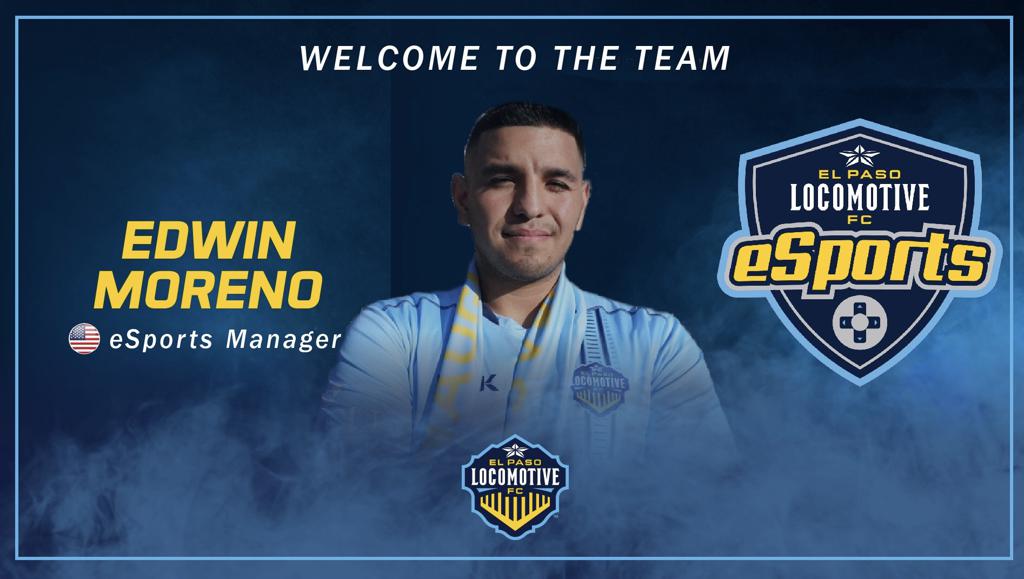 Not all players on the Locomotive squad lace up their boots to play the beautiful game, one of them plugs in his controller and connects with his team online. Edwin Moreno is now the first official player and the eSports Manager for El Paso Locomotive FC. Moreno and his team will play under the Locomotive name, crest and colors on an online platform through Virtual Pro Gaming (VPG) and compete in 11v11 soccer matches ran through FIFA.

Online gaming, or eSports the more common moniker, is the next frontier in competition, with organizations across the world and across multiple sports jumping on the train. From the NBA to the EPL to MLS, teams have invested in not only dominating in between the lines but in a virtual atmosphere as well. Just like in the physical realm, our e-sport players train, play matches together, and strive to be the best on the pitch every time their studs touch the grass, or when the lights of their gaming console fire up. Edwin Moreno will act as a player/manager, representing El Paso Locomotive FC on the digital pitch. From recruiting players, deciding lineups and setting up practices and matches, his role places Moreno in the middle of every decision to carry the virtual Locomotive to glory. “I have assembled a team that I think can win the Virtual Pro Gaming Tournament and I am so thrilled to have this opportunity that El Paso Locomotive has offered me,” said Moreno upon signing the very first eSports contract in El Paso Locomotive FC history. “The chemistry amongst each other is what is most important to me when picking players. Everyone needs to understand how to play not only their position but understand how to play effectively with one another.”

Not only is El Paso Locomotive coming into the USL Championship season as one of the newest expansion teams, they are now the second USL Championship club that has an eSports component, with Western conference opponent Orange County SC being the first club to field a virtual team. “I am looking forward to the rivalry building up between us and Orange County. Being the two teams in the league things should be interesting,” said Moreno.

Moreno’s team is made up of players from around the country and features a few players from Canada. It works just like it does in the real world, practice makes perfect. Players create a virtual player and their player levels up over countless hours of matches, slowly getting better at their position, getting faster and improving over time. The lines between the digital and physical realm blur with advances in technology and accessibility.

Moreno treats his position as seriously as a professional soccer coach would. He watches film on the other teams they will be playing, holds practices, tryouts and even scouts for players; it is a fully-immersive approach to soccer but on a digital plane. It is as real as it gets. “We watch film on another team and see how they play. We can spot weak points in their defense, see if they are good on set pieces and go over tactics for the match.” It requires a substantial grasp of soccer technical knowledge coupled with a high level of skill on the gaming side.

In 2017, FIFA recorded that an estimated 42 million people played on consoles alone and the numbers have been growing each year. What has also been growing is the number of viewers these matches pull. Last month, Moreno’s team received viewership on average of 5,000 people a match and he plans on growing that audience. “People that watch us play on our streams are really shocked the first time, they don’t realize how realistic it is in terms of the rules and play structure. It is like watching a real match,” said Moreno. Fans will now have the opportunity to cheer on EP Locomotive across multiple planes of existence. Though the way they play is different, soccer remains a universal tool to bring people together and form bonds and connections amongst those who may never have met without it. “All the people on my team I have met through playing online. They were opponents who became teammates and then friends. It’s special,” said Moreno. In case you are wondering, his console of choice is PlayStation and his favorite team is El Paso Locomotive, obviously.