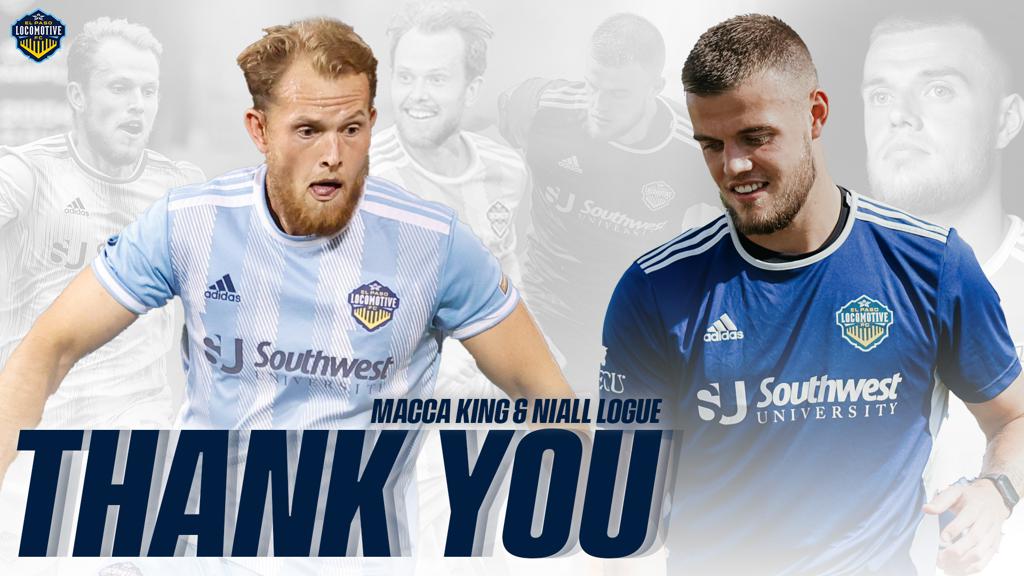 El Paso Locomotive FC announced today it has completed the transfer of Defender Macauley ‘Macca’ King to Colorado Springs Switchbacks FC while Defender Niall Logue and Locomotive FC mutually agreed to part ways, allowing Niall to sign with Memphis 901 FC.  Per club policy, the details of the transfer have not been made public and both are pending league and federation approval.

King departs El Paso Locomotive after two seasons with the club, having joined in the summer of 2020. Since joining the club, King fit in as a right back on the Locomotive defensive line, playing for 2,881 minutes over 37 games. In that time, King found seven goals and five assists by serving the ball into the box while getting on the end of set pieces from corners and freekicks to find the back of the net. After a stellar second season with El Paso Locomotive FC that saw King earn five Team of the Week accolades.

Niall Logue departs under mutual agreement as the Irish defender joins Memphis 901 FC where he had spent the 2021 USL Championship season on loan. During his loan, Logue helped lift the Eastern Conference club to a playoff after 22 appearances.

El Paso Locomotive FC kicks off its fourth USL Championship season against Sacramento Republic on the road on March 12 broadcast live on ESPN+. The Locos return to Southwest University Park a week later on March 19 for its 2022 season home opener against New Mexico United. Fans can become eligible for priority purchasing for Locomotive game tickets by signing up for the ticket waiting list by clicking here. Fans can also lock in their seats for the entire 2022 USL Championship season at Southwest University Park by visiting eplocomotivefc.com/seasontickets or by calling or texting 915-235-GOAL.