Thank You, Logan, Nick, and Leandro! 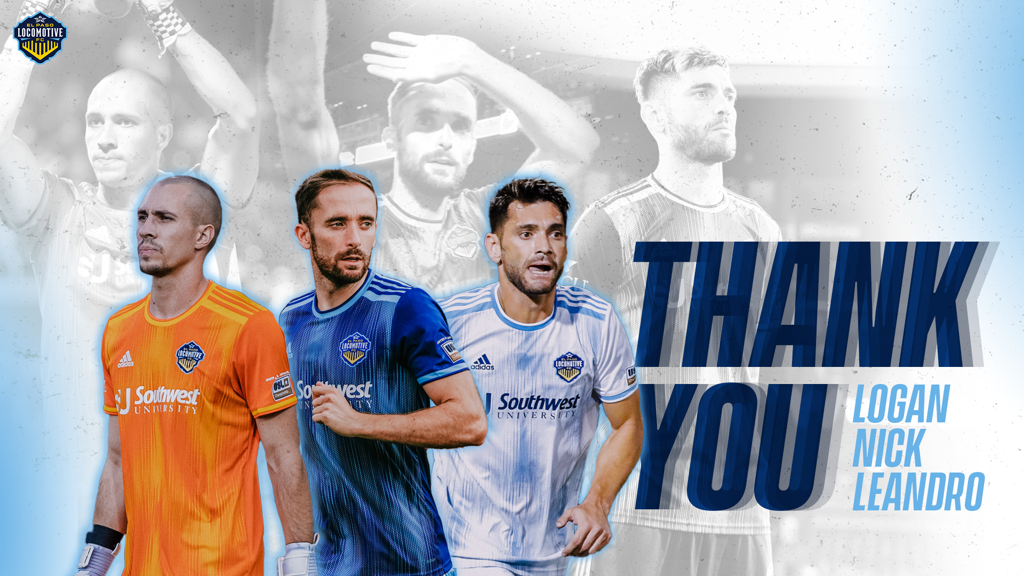 Logan Ketterer cemented himself as an anchor in goal for El Paso Locomotive. As an ironman for the club, Logan played for a total of 7,500 minutes across 82 appearances for the club, the most of any player in Locomotive history. The Wisconsin native put in outstanding performances between the pipes, recording a total of 30 clean sheets for Locomotive FC while helping lift the club to back-to-back Western Conference Finals in its first two years of play and a third consecutive playoff appearance in its third year. Logan’s time with Locomotive was highlighted through a loan with Portland Timbers of Major League Soccer, where he represented the El Paso talent for three games, earning two clean sheets and making a penalty kick save against the MLS All-Time Leading Goal Scorer.

Nick Ross acted as a silent engine from the midfield for El Paso Locomotive FC, playing a versatile role in the Locomotive diamond. Throughout his three years with Locomotive, Nick moved around the midfield playing on the width to help transition from defending to attacking as well as playing more defensively to help lock down one of the best defenses in the league. Nick Ross recorded six goals and eight assists over 5,819 minutes and 75 appearances, including every match in the 2021 USL Championship season.

Leandro Carrijo acted as depth and fresh legs over his two seasons with El Paso Locomotive FC, coming into the game as a late-game substitute to change the flow of the match. Joining El Paso Locomotive in the summer of 2020, Leandro made a massive contribution in the 2020 Western Conference Quarterfinals with two goals against FC Tulsa to send the match into a penalty shootout for Locomotive to advance. In the 2021 season, the FC Juarez leading striker played in 31 games through the regular season, only seven of which were starts. As a late-game catalyst, Leandro found four goals and two assists to help lift El Paso to third-place finish overall in the league. Over his two seasons in all competitions, Leandro recorded six goals and three assists over 33 appearances and 1,401 minutes.

The three left a long-lasting legacy for the Sun City club. El Paso Locomotive FC is thankful for their contributions and wish all three the best in the next steps for their careers.

El Paso Locomotive FC is currently working on additional player announcements for its fourth season and will announce 2022 roster additions once they are confirmed.