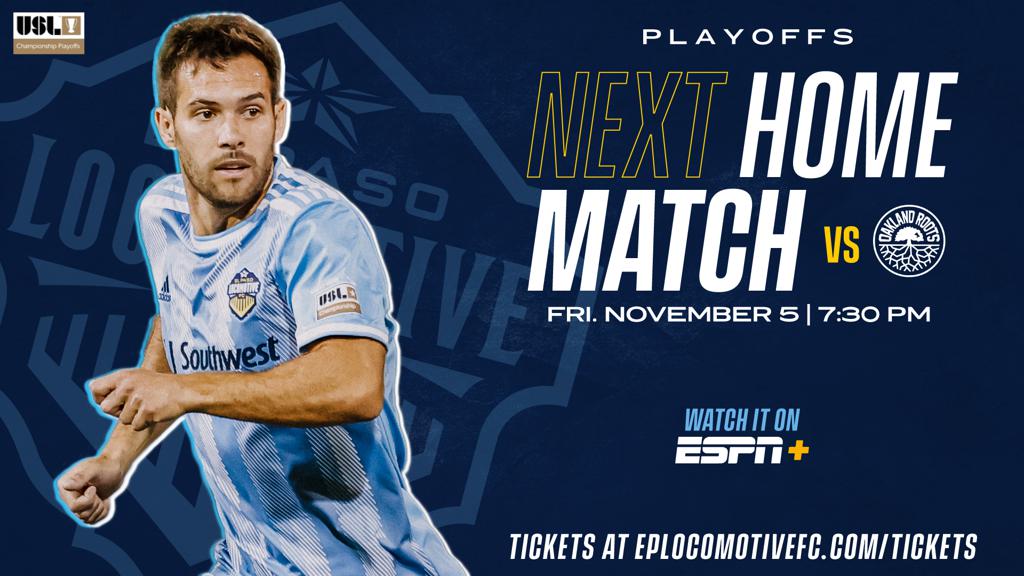 Good tickets are available at eplocmotivefc.com/tickets, by phone at 915-235-GOAL, or through the Official El Paso Locomotive FC App. Tickets can also be purchased at the Southwest University Park box office. The box office is open 10 a.m. – 5 p.m. today through Thursday and on Friday from 10 a.m. until 30 minutes after the conclusion of the match.

As part of the match festivities, fans can enjoy a $6 Estrella Jalisco & Souvenir Popcorn special through the 75th minute. Fans are encouraged to purchase early to save over day of game prices!

For the third consecutive year, El Paso Locomotive kicks off its run towards the USL Championship Final to bring a set of trophies to El Paso. After a successful 2021 regular season that saw Locomotive earn a club-best record of 18-4-10, El Paso is poised to make a historic playoff push. Using its North American best 25 home game unbeaten streak, Los Locos welcome Oakland Roots SC for the first time to Southwest University Park for the opening round of the playoffs.

El Paso Locomotive FC has seen nothing but success in playoff situations at Southwest University Park, having advanced to the next round following home playoff games. In 2019, Locomotive hosted one game, claiming a 3-0 win over Sacramento Republic before hosting two games in the playoffs in 2020, taking home wins over FC Tulsa and New Mexico United following dramatic penalty shootouts. Meanwhile, Oakland Roots SC will be making its first postseason appearance since joining the league as an expansion side earlier this year. The Locos and Roots have yet to meet on the pitch, making this is an exciting match-up against an unfamiliar opponent. As the exciting young-blood of the USL Championship, Roots SC will be eager to make a statement against an El Paso side that has seen the Western Conference in every year of its existence.

Should Locomotive FC earn a win against Oakland Roots SC on Friday, November 5, it will play host to the winner of Orange County SC and Colorado Springs Switchbacks FC on Saturday, November 13. Tickets are on sale now.