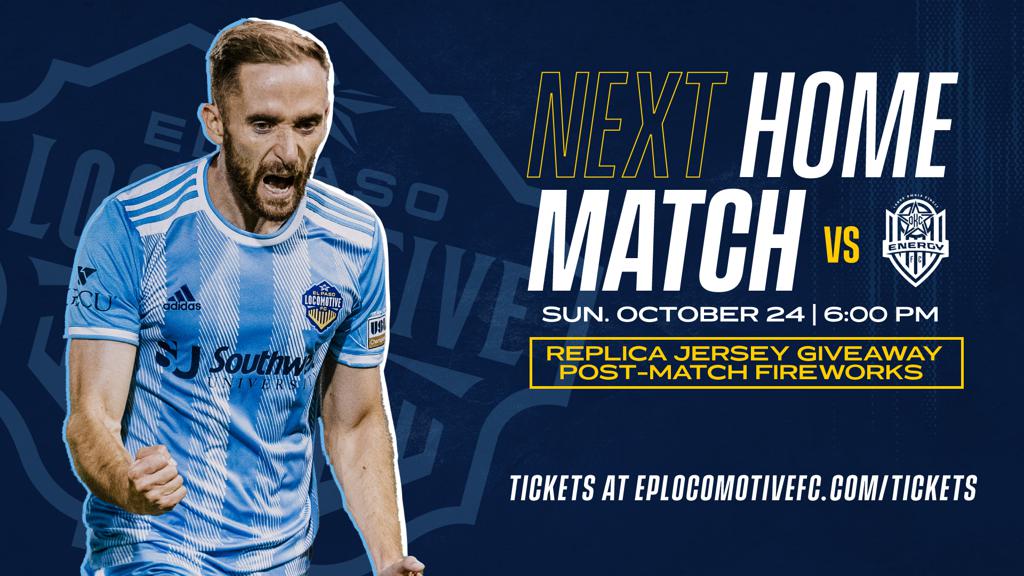 El Paso Locomotive (17-3-10, 61 pts., MTN-1) welcomes OKC Energy FC to Southwest University Park on Sunday for the 2021 Regular Season Home Finale. The match will be nationally broadcast on ESPN Deportes. Kickoff from El Paso is set for 6:00 p.m. MT. Tickets are available for purchase at eplocomotivefc.com/tickets, by phone at 915-235-GOAL, or through the official El Paso Locomotive FC app.

Fans are encouraged to arrive at the stadium early as the first 2,000 fans into the stadium when gates open at 5:00 p.m. MT will receive a replica white jersey. The high-demand fan-favorite jersey has not been made available making this the one and only opportunity for fans to get their hands on the jersey.

Only two games are left for El Paso Locomotive FC in the 2021 USL Championship season making any ounce of earned momentum is essential as the Sun City club eyes its third USL Championship title run. Following the 3-0 win over Austin Bold FC, momentum is certainly swinging El Paso’s way. With one more home game to secure a near-perfect 2021 home record, Locomotive will be setting itself up for what will be an incredible post-season, as Southwest University Park will play host to the Western Conference Quarterfinal and the Semifinal should Locomotive advance.

After taking down Austin Bold FC, Locomotive has another opportunity to dash playoff dreams with OKC Energy FC on Sunday evening. While El Paso has already cemented its playoff run, OKC is still aiming to upset its rival, FC Tulsa by taking the fourth spot in the Central Division. The upset would require Sunday being a must-win game for OKC Energy FC, meaning they will be bringing their all to repeat history and upset El Paso Locomotive in their home territory. These two clubs haven’t met since 2019, but their reunion at Southwest University Park will be worthy of the national broadcast as both teams have a lot to play for ahead of the post-season.