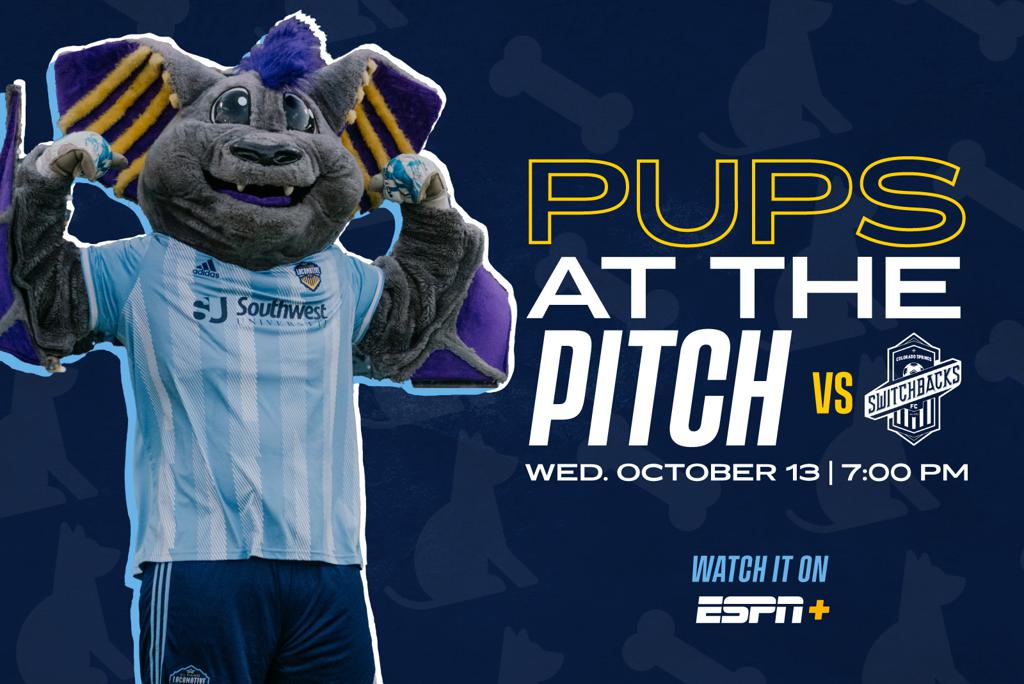 El Paso Locomotive (15-2-10, 55 pts., MTN-1) hosts Colorado Springs Switchbacks FC for a final regular-season meeting at Southwest University Park on Wednesday, October 13. Kickoff is set for 7:00 p.m. MT, Gates will open at 6:00 p.m. MT and tickets are available for purchase online at eplocomotivefc.com/tickets, by phone at 915-235-GOAL, or through the official El Paso Locomotive FC app.

Wednesday night is Pups at the Pitch night! Fans can bring their furry friends to Southwest University Park to help cheer on El Paso Locomotive as they fight for a home playoff game in the final stretch of the season. Tickets for fans who want to bring their pup to the pitch are limited, so get yours in advance. Visit eplocomotivefc.com/pupsatpitch for more information.

For the final time of the 2021 USL Championship regular season, one of the top defenses in the league takes on one of the best offenses in the league. So far through three meetings, the immovable defense of Locomotive has held off the irresistible force that is the Switchbacks offense, playing to three draws, two ending 1-1 and the other ending scoreless. In the regular-season series finale between these two clubs, there is a lot to play for as both sides enter the home stretch before the playoffs.

El Paso Locomotive FC has stagnated in results, though still stands as an immovable object. Locomotive has not lost a game in their last eight matches but has only picked up three wins. Coming off a big 2-1 win against FC Tulsa, El Paso is swinging momentum back into its favor at a crucial moment before the post-season begins. A win or a draw against Switchbacks FC would guarantee a home playoff game and puts Locomotive one step closer to claiming the Mountain Division. Switchbacks fighting San Antonio FC for second place in the division and are aiming to earn a critical win in that fight. In their last seven games, Switchbacks have only won three times, nearly mirroring Locomotive’s current form. Playoff implications are on the line for what should be a tactically tense game between two top clubs.