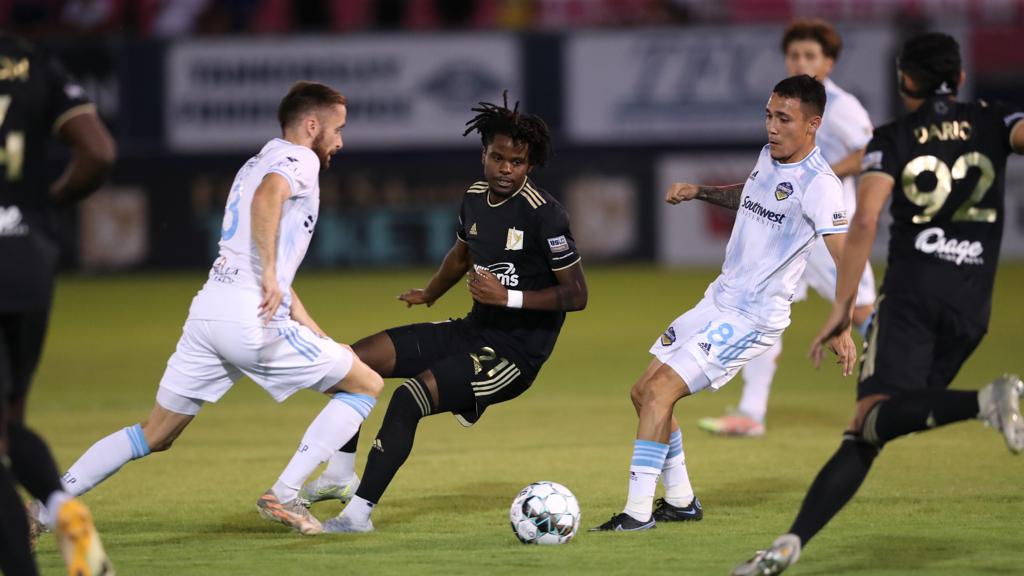 El Paso Locomotive (15-2-10, 55 points) earned its 15th win of the season on a 2-1 scoreline against FC Tulsa at ONEOK Field on Saturday. Forward Aaron Gomez scored in the 6th minute for his 7th of the season before earning his third assist on Forward Lucho Solignac’s 8th goal of the season moments later.

“Clinching playoffs feels good,” said Head Coach and Technical Director Mark Lowry post-game. “I think it was always going to happen. We’ve been at the top for a while, so I feel like that was inevitable. It’s good to get back to winning ways. We obviously have a ton of injuries right now. We have a makeshift backline there in front of Logan [Ketterer] and the guys put in a great shift tonight. Getting back to winning ways on the road is important. Tulsa is a really good team; they’re going to make playoffs in their division, obviously. Great performance by everybody. The guys put in a real blue-collar work ethic tonight to get the result.”

El Paso came out on fire, dominating the opening 15 minutes of the match and putting FC Tulsa on their backfoot. The early pressure paid off with a dangerous throw in from Defender Macca King that found Gomez at the back post for an easy redirect for a goal in the sixth minute. Just moments later, Gomez played a role in the second Locomotive goal with a deep cross of pin-point accuracy that came off the head of Solignac in the 14th minute. Tulsa began chasing the game, sending clear shots for a goal well wide of the frame. Tulsa would be able to pull one back before the halftime whistle as Rodrigo da Costa snuck in a goal in the dying seconds.

The second half slowed down the game considerably, with Locomotive content to take home a 2-1 win while Tulsa felt out the packed-in El Paso defense. El Paso managed to get into an attacking threat with Midfielder Diego Luna finding Lucho to tap in an easy goal that was ultimately disallowed on an offside call. FC Tulsa had their chances with a freekick headed towards goal that Goalkeeper Logan Ketterer dove deep to deny. The second half stayed quiet with neither side getting the edge over the other leaving Locomotive to claim a full three points on the road and clinch a playoff appearance.

UP NEXT: El Paso Locomotive comes back to Southwest University Park to welcome Colorado Springs Switchbacks FC for their final showdown of the 2021 USL Championship regular season. Kickoff is set for 7:00 p.m. MT on Wednesday, October 13. Tickets are available for purchase at eplocomotivefc.com/tickets or by calling 915-235-GOAL or through the official El Paso Locomotive FC app.

ELP: Aaron Gomez (Macca King), 6th minute: Early in the game, Locomotive earned a throw in dangerously close to the Tulsa end line. Macca threw the ball in deep, flying all the way to the far post where Gomez was waiting to simply tap in the first goal.

ELP: Lucho Solignac (Aaron Gomez), 14th minute: Absolutely dominating the opening 15 minutes, Aaron Gomez sent a deep cross into the penalty area that found Lucho Solignac who had perfectly slipped in between two defenders. Unmarked, Lucho easily got a head to the ball and put it past Sean Lewis to double the Loco lead.

TUL: Rodrigo da Costa (Dario Suarez), 46th minute: Just before the final halftime whistle, Tulsa got a dangerous ball into the penalty area where Dario Suarez lay the ball back to Costa near the top of the box. A quick low shot snuck through traffic and into the net to pull one back.

- For the first time since joining El Paso Locomotive FC, Defender Macca King donned the captain’s armband on the pitch.