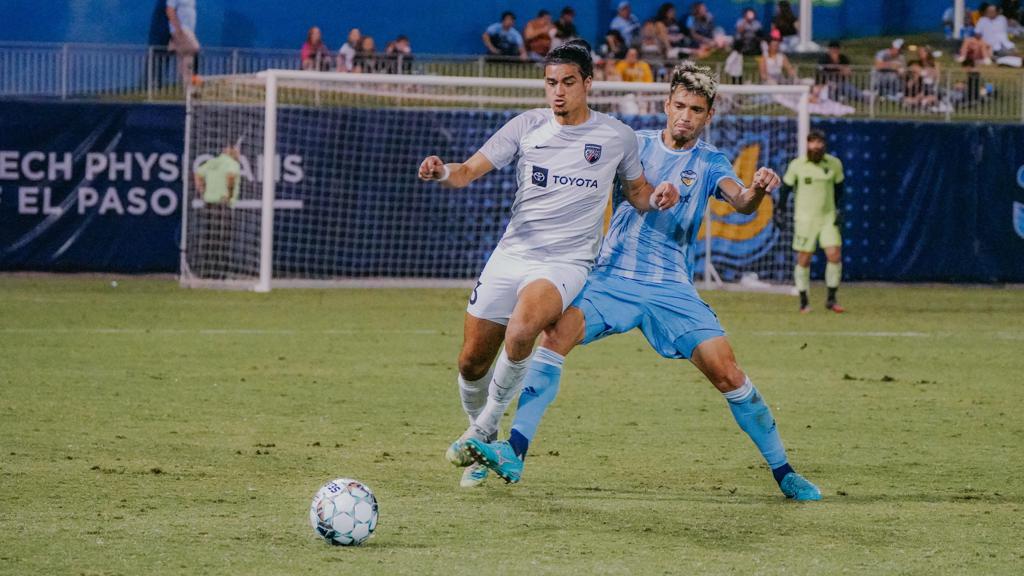 El Paso Locomotive (14-2-10, 52 points) picked up a point at Southwest University Park on a dramatic 3-3 draw against San Antonio FC on Wednesday. Defender Macca King opened the Locomotive scoring, while Midfielders Nick Ross and Diego Luna rounded out the three goals for El Paso. With the point against a Texas team, Los Locos claimed the Copa Tejas for the faithful Locomotive supporters.

Wednesday night’s game was night and day from the first and second half, as San Antonio completely dominated the opening 45 minutes. While Locomotive held the majority of possession, loose passes allowed San Antonio to break away with shots that Goalkeeper Ben Beaury was able to get stops on. Beaury’s stops deflected twice back into the play where Justin Dhillon and Mathieu Deplagne cleaned up in the 10th and 27th minutes respectively.

Midfielder Dylan Mares and Forward Aaron Gomez entered the match at halftime, breathing new life into the Locomotive side to kick off a comeback that led to three goals for El Paso. King started the comeback with a headed goal off the set-piece in the 57th minute while Ross took advantage of a poor clearance to slide one past SAFC goalkeeper Matt Cardone. San Antonio began to push back, but Luna provided a late Locomotive lead by using his speed to get around SAFC defenders and put away a Locomotive third. El Paso seemed destined to take the three points but a late 94th minute header from Kortne Ford ended the match with three goals apiece.

“The guys were great in the second half,” said Head Coach Mark Lowry. “They had resiliency and character. You can’t fault them at all. The guys we have available were absolutely superb.”

UP NEXT: El Paso Locomotive goes back on the road, heading to the Central Division for a match against FC Tulsa on Saturday, October 9. Kickoff is set for 6:00 p.m. MT and will be broadcast live on ESPN+.

SA: Justin Dhillon, 10th minute: The young Jose Gallegos took it to the Locomotive defense, outmaneuvering his marking to open up a shot on goal which Ben Beaury was easily able to deflect. Unfortunately, the deflection went straight into the path of Dhillon who simply the ball back for the first goal of the night.

SA: Mathieu Deplagne, 27th minute: The continued San Antonio pressure paid off once more as Marcus Epps took a header that bounced past a diving Ben Beaury, only to bounce off the post and back into the path of Deplagne, who once against cleaned up the deflection and furthered San Antonio’s lead.

ELP: Macca King (Dylan Mares), 57th minute: Off a set-piece opportunity, Mares sent a ball into the far post where King rose above the rest to get a head on the ball. King sent the ball back to the near post where Matt Cardone’s reach was just not enough to stop.

ELP: Nick Ross, 73rd minute: Securing a poor clearance from the San Antonio FC backline, Nick Ross latched on to the ball, juking past his defender before taking a quick shot at the near post. While Matt Cardone was able to get a touch to the ball, it wasn’t enough to make the stop as it rolled deep into the back of the net.

ELP: Diego Luna, 85th minute: On a loose ball at the middle of the box, Luna sprinted to beat the defender. As the San Antonio defender stepped up to put an end to Luna’s attack early, the 18-year-old broke past him before taking a shot that bounced off the post and into the net.

SA: Kortne Ford (Mitchell Taintor), 94th minute: From the midfield, Taintor sent a deep ball into the penalty area where Ford got a head that redirected the ball past Ben Beaury in goal and end the match level.

- Goalkeeper Ben Beaury made his second start in goal for El Paso Locomotive make three saves throughout the night.

- While Locomotive failed to clinch a playoff spot tonight, they have another opportunity with a result against FC Tulsa on Saturday.

- With his assist for Macca King, Dylan Mares is now tied for in all-time leading assists through the regular season at 8 assists.