With a Draw or Win Against San Antonio FC, Locomotive will Claim Copa Tejas for El Paso 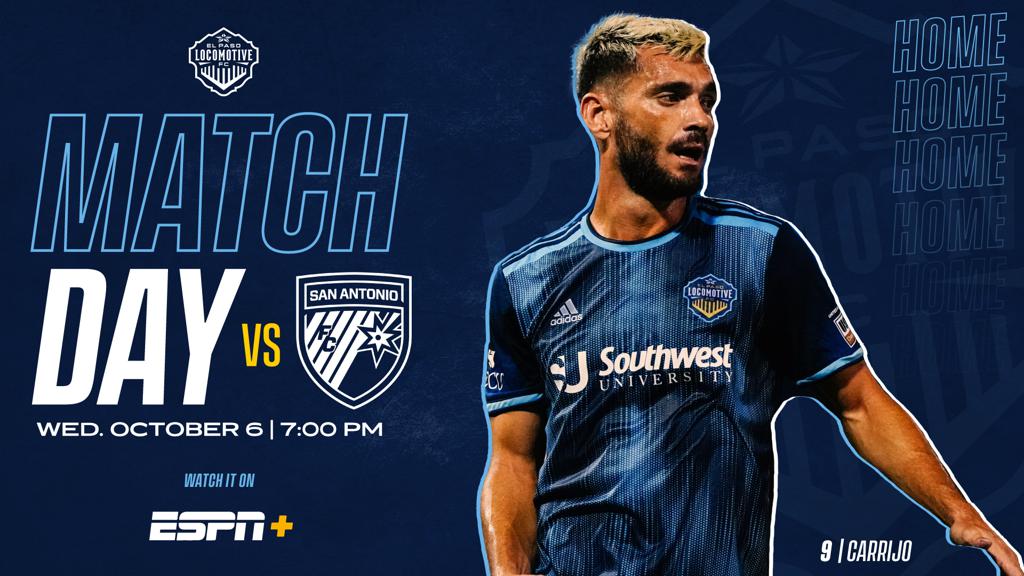 El Paso Locomotive (14-2-9, 51 pts., MTN-1) defends the Southwest University Park fortress against San Antonio FC on Wednesday, October 6. Kickoff is set for 7:00 p.m. MT with gates open at 6:00 p.m. MT. Tickets are available for purchase online at eplocomotivefc.com/tickets, via phone at 915-235-GOAL, or through the El Paso Locomotive FC App.

Locomotive and San Antonio have met three times so far in the 2021 USL Championship in matches that have put El Paso in the lead of the series record, 2-1-0. The last matchup served as only the second loss for the Locos in this season. San Antonio’s first-half lead provided by Marcus Epps in the 32nd minute was leveled out by a header from Midfielder Sebastian Velasquez in the 54th minute. Both sides struggled to get an edge but in the end, it was SAFC that claimed three points in the dying seconds as Justin Dhillon found a late 94th-minute goal.

The two sides now go into their regular-season series finale in a match that has silverware on the line for El Paso, and major playoff implications for both ends. It’s a critical Copa Tejas contest, one in which Locomotive could claim the cup with either a draw or a win. Only El Paso and Austin are in the running to claim the cup, but El Paso is the favorite to win with two games in hands and needing only one point to claim it. Additionally, pending results around the league, Los Locos could clinch its third straight playoff appearance with a result against San Antonio FC. Meanwhile, San Antonio FC is aiming to overtake Switchbacks FC for the coveted second spot for a guaranteed home field game in the opening round of the postseason.