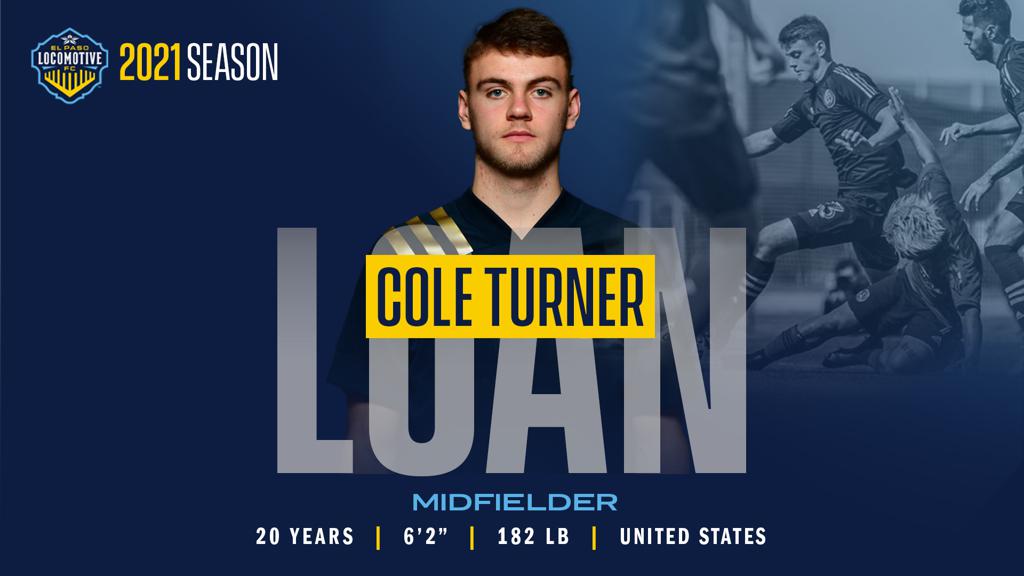 El Paso Locomotive FC announced today it has signed Philadelphia Union homegrown Cole Turner on loan for the remainder of the 2021 USL Championship season. The transaction was completed prior to the USL Championship’s official roster freeze this past Friday.

“Cole is a player with USL and MLS experience and is coming on loan from a very good MLS Club,” said Head Coach and Technical Director Mark Lowry. “He is strong and a very good ballplayer from the central area of the field. He plays in a key position where we feel like we are going to need some extra support during this stretch of games in October. We are excited to have him with us.”

Turner, 20, came through Major League Soccer side Philadelphia Union’s Academy program, where he signed in 2015. In 2019, Turner was a USL Academy signing with the USL Championship’s Philadelphia Union II, making a total of 29 appearances during his time with the club. In January 2020, the Maryland native signed an MLS Homegrown Player contract with Philadelphia Union, making his MLS debut against Club de Foot Montreal on September 20 as he provided depth for the club to help the Union win the Supporters’ Shield in 2020. In addition to his experience in the Championship and MLS, Turner was called to a USMNT U-14 team camp in 2014.

Cole Turner joins El Paso Locomotive ahead of its contest on Wednesday night against Real Monarchs SLC. In honor of Noche de Locos, the first 2,500 fans in attendance will receive a Noche de Locos Sugar Skull bandana. Kickoff is set for 7:00 p.m. MT and gates open at 6:00 p.m. MT on September 29. Tickets are available at eplocomotivefc.com/tickets or by calling 915-235-GOAL.

Transaction: Locomotive acquires Midfielder Cole Turner on loan from Philadelphia Union for the remainder of the 2021 USL Championship season.