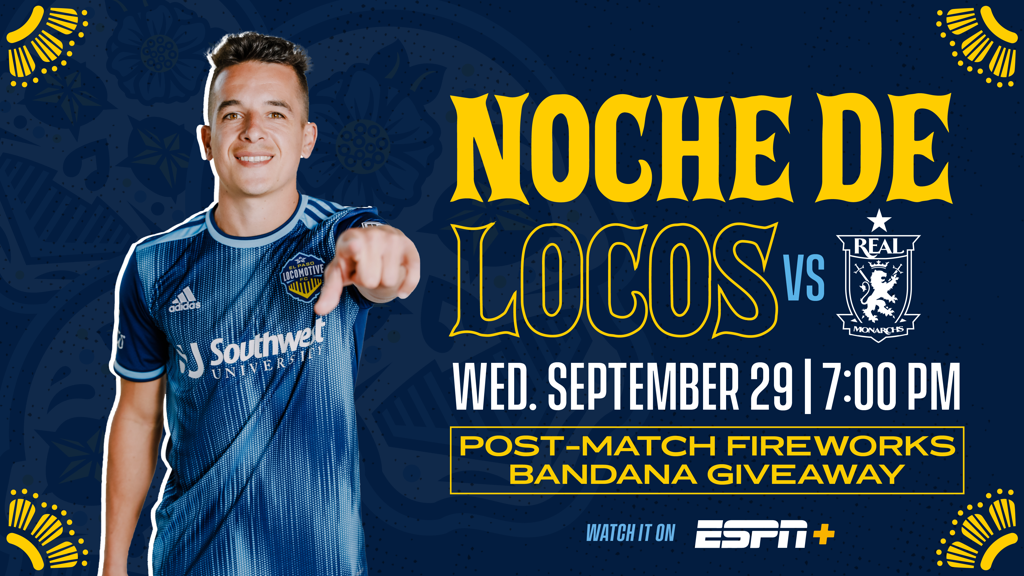 El Paso Locomotive (13-2-8, 47 pts., MTN-1) hosts Real Monarchs at Southwest University Park for the second time this season on Wednesday, September 29, with kickoff set for 7:00 p.m. MT. Tickets are available for purchase online at eplocomotivefc.com/tickets, by phone at 915-235-GOAL, and through the official El Paso Locomotive FC app.

El Paso Locomotive celebrates Noche de Locos on Wednesday night. To help celebrate the festive evening, the first 2,500 fans in attendance will receive a new Noche de Locos Sugar Skull bandana before capping off the night with a fireworks show for fans to enjoy. Gates open at 6:00 p.m. MT, so arrive early to get your bandana and help cheer on Locomotive as they start their push to the playoffs.

Coming off a 2-2 and a 0-0 draw respectively, El Paso Locomotive and Real Monarchs are set to face each other one final time in the 2021 USL Championship season. Locomotive currently sits at the top of the Mountain Division, while the Monarchs sit at the bottom in the seventh. The two last met at the end of July, where an early 1-0 lead from Real Monarchs was undone in the second half with three unanswered goals by Aaron Gomez and Lucho Solignac for the El Paso 3-1 win.

As both teams enter the final stretch of the regular season, they have set their sights on what they need to make an appearance in the post-season. For Locomotive, it will aim to keep distance at the top of the table with games in hand, hoping to reach its magic number sooner rather than later. Real Monarchs could have their playoffs hoped dashed however with a loss against Locomotive, as dropping three points would mathematically eliminate the Utah side from contention.