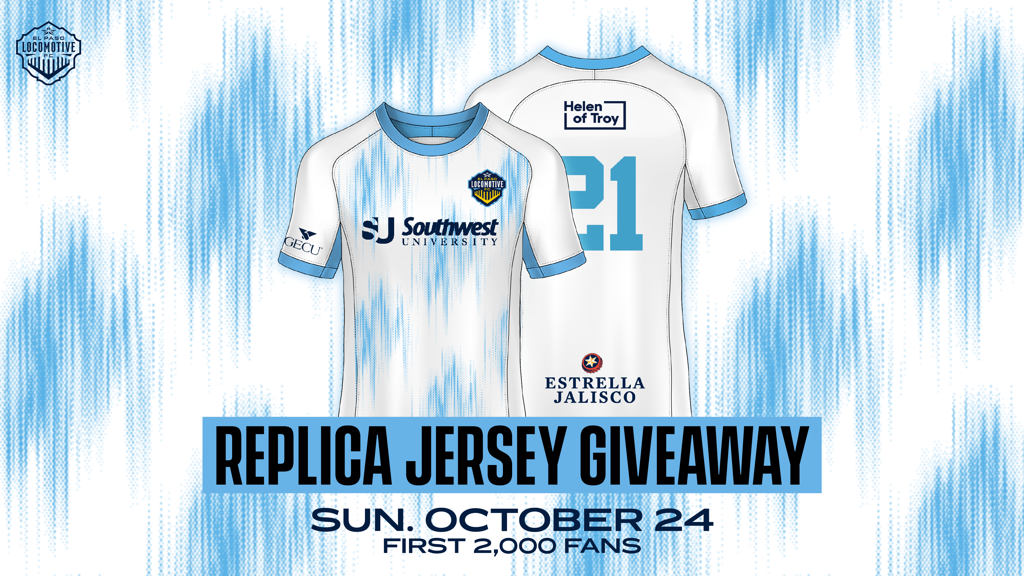 EL PASO, Texas (September 14, 2021) – El Paso Locomotive announced today it will be giving away a replica edition of the highly sought-after white jersey to celebrate the close of its 2021 USL Championship regular season home campaign. The first 2,000 fans in attendance to the nationally televised ESPN Deportes home finale on Sunday, October 24 against OKC Energy FC will receive this giveaway.

“The fans spoke, and we listened,” said Andrew Forrest, Locomotive General Manager, Business Operations.  “This is one of the most premium giveaway items of the entire year across the USL. Nothing seemed more fitting than rewarding the fans with this giveaway on the last regular-season home game against the first team Locomotive played in its existence.  We look forward to these kits coming back to Southwest University Park for years to come.  Secure your tickets and arrive early; these will not last long!”

The 2021 Locomotive White Jersey – first announced ahead of the Locomotive’s third USL Championship campaign – became an instant fan favorite. Its white design combined with the iconic sky-blue wave pattern gave a fresh and clean feel compared to its navy blue and light blue counterparts. The white Locomotive kit was announced as a player exclusive jersey not available in stores but, due to popular demand, fans now have the opportunity to get their hands on a replica version of the white jersey exclusively at this match.

Fans can purchase tickets for the 2021 USL Championship regular-season home finale against OKC Energy FC on Sunday, October 24, and any remaining home matches, online at eplocomotivefc.com/tickets, by phone at 915-235-GOAL, or through the official El Paso Locomotive FC app. The match is scheduled for a 6:00 p.m. MT kickoff with gates opening at 5:00 p.m. MT. It will be broadcast live on national television on ESPN Deportes and will include a fireworks show for fans to enjoy after the game.