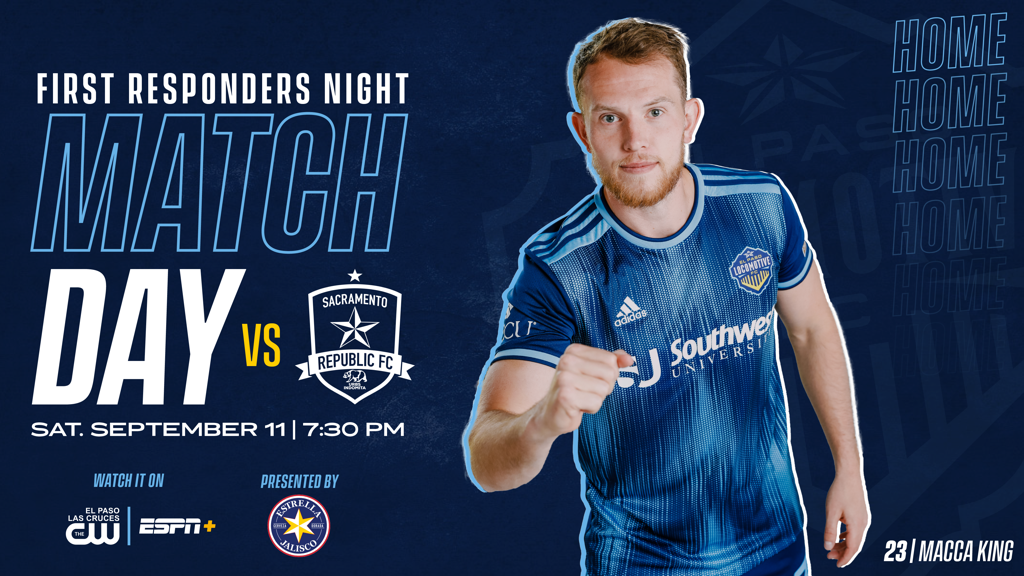 In honor of First Responder's night, all first responders, active military, and veterans can receive a free Estrella Jalisco and pretzel as well as 25% savings on tickets to Saturday's game. Saturday night’s action will be capped off with a fireworks show for fans in attendance to honor the men and women who serve as first responders to keep our communities safe. Tickets are available for purchase online at eplocomotivefc.com/tickets, by phone at 915-235-GOAL, or through the official El Paso Locomotive FC App. For the First Responder and Military discounted tickets click here.

It has been nearly two years since El Paso Locomotive and Sacramento Republic took to the pitch against one another. Their last meeting took place in the 2019 Western Conference Semifinals, in a game that saw El Paso claim an emphatic 3-0 victory in its very first hosting playoff game to book a ticket to the Western Conference Final. Before then, Locomotive played Sacramento twice, sweeping the regular-season series on 2-1 and 3-1 wins.

The two meet once again at Southwest University Park, though this time as two drastically different teams. In 2019, El Paso finished 6th in the regular season just above the 7th place Sacramento Republic with two points, the two sides ending with a record of 13-10-11 and 14-14-6, respectively. Now in 2021, El Paso Locomotive dominating its Mountain Division, contending with teams across the league for the Top Seed in the USL Championship. Meanwhile, Sacramento Republic started its season on the wrong foot but has since found its form to contend for a spot above the playoff line in the Pacific Division. A win for El Paso could keep the distance over the rest of the pack in the Mountain Division, while a win for Sacramento would close the gap to the playoff line in the Pacific.