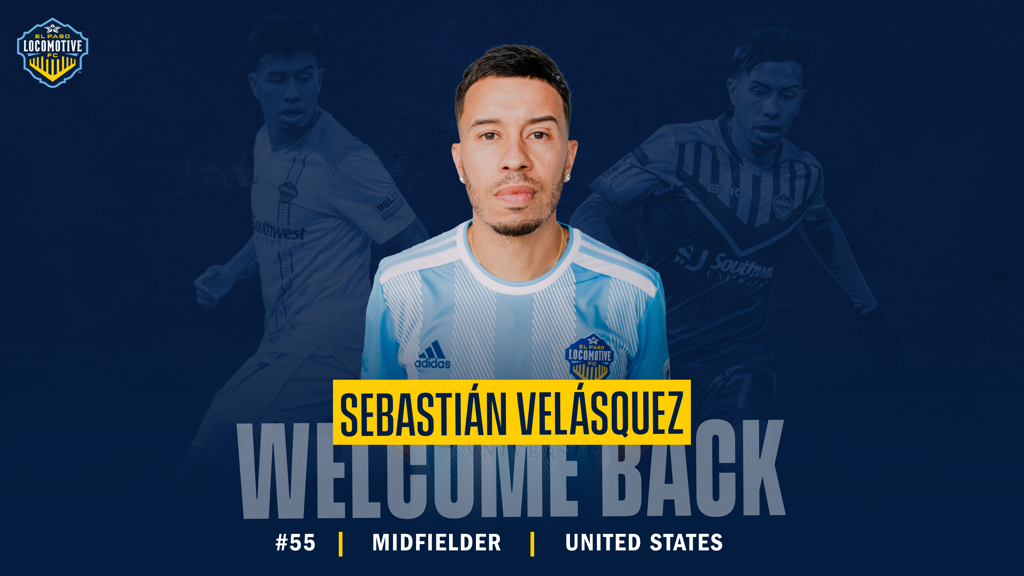 “We are very happy to welcome back Sebastian into our group,” stated Mark Lowry, Locomotive Head Coach and Technical Director. “There is no doubt Sebastian has great quality, we have seen it before, and we hope to see it again. The current group that we have in 2021 is a different team from what we had back in 2019. We are three years into building a culture on and off the field and that is the main reason why we are on this current unbeaten streak dating back 10 months. This is who we are as a team and an organization. We are always looking for ways to improve and we will never stand still. We move forward every day, and Sebastian is coming in at a good moment, with lots of football left in the season. He can make an impact and help us achieve our very lofty objectives.”

Velasquez, 30, returns to El Paso after spending a season and a half away. In 2019, Velasquez signed with El Paso Locomotive in the summer, helping push the team through to a successful playoff run that secured the club’s first Western Conference Final appearance. During his first stint with Locomotive, the Colombian midfielder made 16 appearances including playoffs, all of which were starts. In that time, Velasquez recorded five goals and one assist.

Since departing Locomotive after the 2019 season, Velasquez moved to Miami FC making four goals in 10 appearances before playing in the Israeli Premier League where he featured in 12 appearances with two goals for Bnei Sakhnin. In 2012, Sebastian Velasquez was selected by MLS club Real Salt Lake 36th overall during the MLS SuperDraft. Velasquez played 38 games across two seasons with RSL, helping lift the team to a 2013 MLS Cup Final, falling in penalties to Sporting Kansas City. After spending the next two seasons with New York City FC in MLS and Rayo OKC in NPSL, Velasquez returned to the RSL organization playing two seasons with Real Monarchs. In 2017, Velasquez helped the team to the USL Championship regular season title earning a spot on the All-League Team at the end of the year.

El Paso Locomotive returns to Southwest University Park on Saturday, July 3rd to take on New Mexico United. The match will be highlighted with a post-game fireworks celebration. Tickets are available online at eplocomotivefc.com/tickets or by calling 915.235 GOAL.