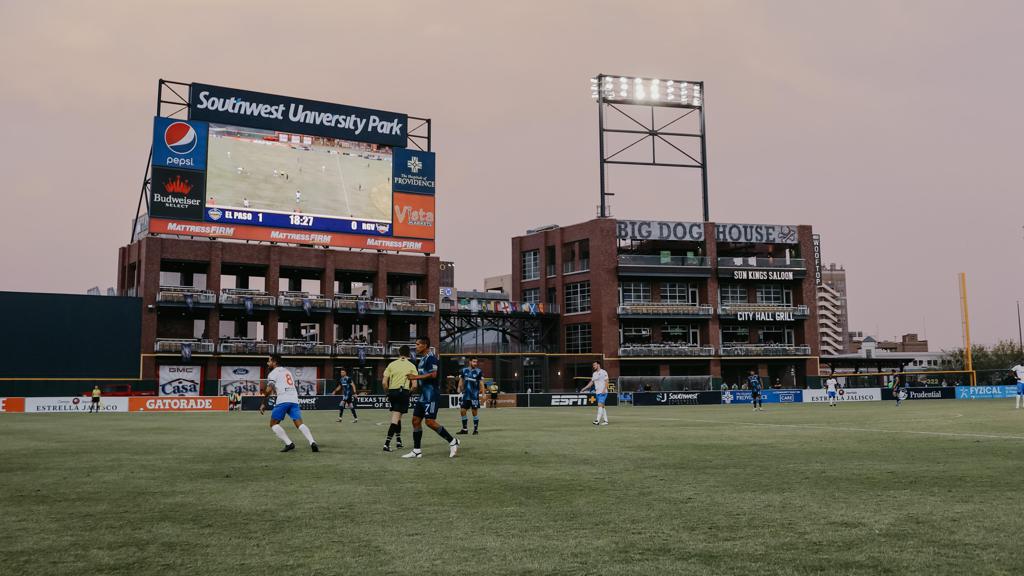 El Paso Locomotive welcomes the Eastern Conference to Southwest University Park through Indy Eleven in the first-ever match-up between the two sides.

PREVIOUS MEETING: The closest El Paso Locomotive and Indy Eleven have come to meeting on the pitch is the 2019 USL Championship playoffs, where the two sides each made it to their respective Conference Finals. Now the two teams will finally clash for the first time in history in an East vs West showdown.

9-0-2. In the last 11 games played at Southwest University Park, El Paso Locomotive has won nine games, drawn two, and lost none. Locomotive has a solid defensive line that currently leads the league in the fewest goals conceded with only one. That stalwart defense has staved off even the most aggressive of offenses since the streak began, proving El Paso is a tough place to come and play and an even tougher place to walk away from with points in hand.

THE RETURN OF KEEPER KETTERER

The Locomotive mainstay in goal has returned to the El Paso fields after a small stint on loan in Major League Soccer. Logan Ketterer made his MLS debut with Portland Timbers FC a few weeks ago, going on to play three games and recording two clean sheets. Highlighting his debut was a penalty kick save against MLS All-Time Leading Goal Scorer Chris Wondolowski. Logan is now back with Los Locos, eager to get back to work in bringing a trophy back to El Paso.

ONE OF TWO REMAIN STANDING

Seven weeks of USL Championship action is in the books and only two teams are left without a mark in the loss column. El Paso Locomotive has played four games, earning a record of 2-0-2, pulling draws against New Mexico United and Sporting Kansas City II and the full three points over Rio Grande Valley FC and Austin Bold FC. The 2021 undefeated regular season record only builds on the already impressive run from the end of the 2020 USL Championship season, making El Paso Locomotive undefeated in 15 regular season games both home and away.

In the 2019 USL Championship season, El Paso Locomotive and Indy Eleven reached the penultimate matches, marking themselves as finalists in their respective conferences. Locomotive took on Real Monarchs while a man down, nearly taking the game to a penalty shoot-out if not for a heartbreaking 120-minute goal from the eventual title-winners. Meanwhile, on the other side of the conference line, Indy Eleven seemed confident in downing the two-time USL Championship title winners Louisville City FC on a 1-0 victory, however, a late stoppage-time goal from LouCity crushed Indy’s dreams of putting the game to bed. Added extra time favored Louisville, as they found two more goals, forcing Indy Eleven out of title contention.

While most on the Locomotive squad may not be familiar with Indy Eleven, two starters have intimate knowledge of the Eastern Conference club. Midfielder Dylan Mares and Defender Macca King both previously played for Indy. Dylan joined the team during its time in NASL finding success with 10 goals and 11 assists before rejoining the club in USL adding two more goals and assists in 2018. Macca played for Indy in the 2019 and beginning of the 2020 seasons, starting regularly on the backline while finding one goal and three assists before making the jump to El Paso Locomotive.