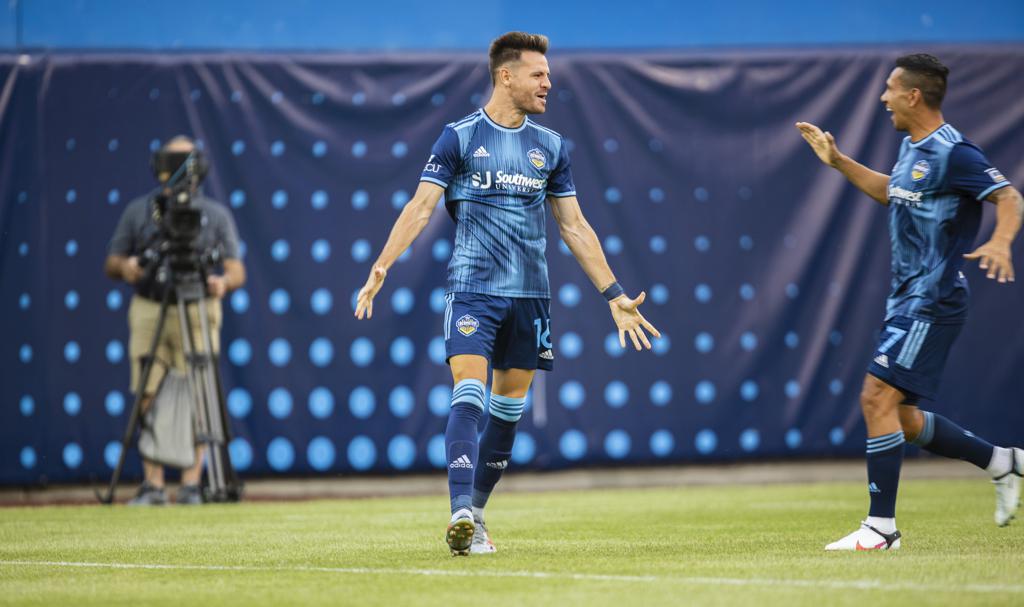 El Paso Locomotive FC ended the Rio Grande Valley FC winstreak at Southwest University Park behind a goal by Forward Luis Solignac on Saturday night. Solignac’s 18th-second goal is the fastest in Locomotive history and currently stands as the fastest goal across the league in the 2021 season.

“I’m really happy,” said Head Coach and Technical Director Mark Lowry. “It’s only our second game of the season but it kind of feels like the first with the bye week last week. We haven’t been able to get momentum, the fitness levels, or build the relationships on the field, and that was [RGV’s] fourth game this season. They’ve won three games so far, they are a good and strong team coming into it with confidence. We started the game great. Lucho [Solignac] with a great press. That’s not luck; it was a smart play. I had a good feeling he was going to score tonight because he had been so good in training.”

Locomotive got off to a dream start with a high press that paid off with a goal in the first minute. As RGV’s goalkeeper Tyler Deric punted the ball out of his own box, Solignac put his body in the way forcing a rebound into the back of the net. With RGV chasing the game for the remainder of the first half, Locomotive was able to get away with chances towards goal, including a long ball from Defender Mechack Jerome that found Midfielder Nick Ross near goal. Ross took one touch to put the ball over Deric, but ultimately sent it over the frame as well.

On the other end of the field, Goalkeeper Adrian Zendejas, on loan from MLS side Minnesota United, tallied a clean sheet in his debut. Tested into only one save tonight, the Locomotive backline held strong against an RGV side that was chasing the game to help secure the three points at Southwest University Park.

ELP: Luis Solignac, 1st minute: As RGVFC’s Goalkeeper Tyler Deric went to punt the ball far from his own goal, a high press from Solignac allowed him to jump in the way before the ball got cleared out. Rebounding off Solignac, the ball bounced into the RGV goal, providing the fastest goal in franchise history.

- Forward Luis Solignac found the fastest goal in Locomotive franchise history, rebounding a punted kick by RGV Goalkeeper Tyler Deric into the back of the net in the 18th second.

-  Goalkeeper Adrian Zendejas made his Locomotive debut after signing on loan from MLS club Minnesota United, the day before.

- Locomotive moves its undefeated record to 9-0-2 in the last 11 games played at Southwest University Park, including playoffs.