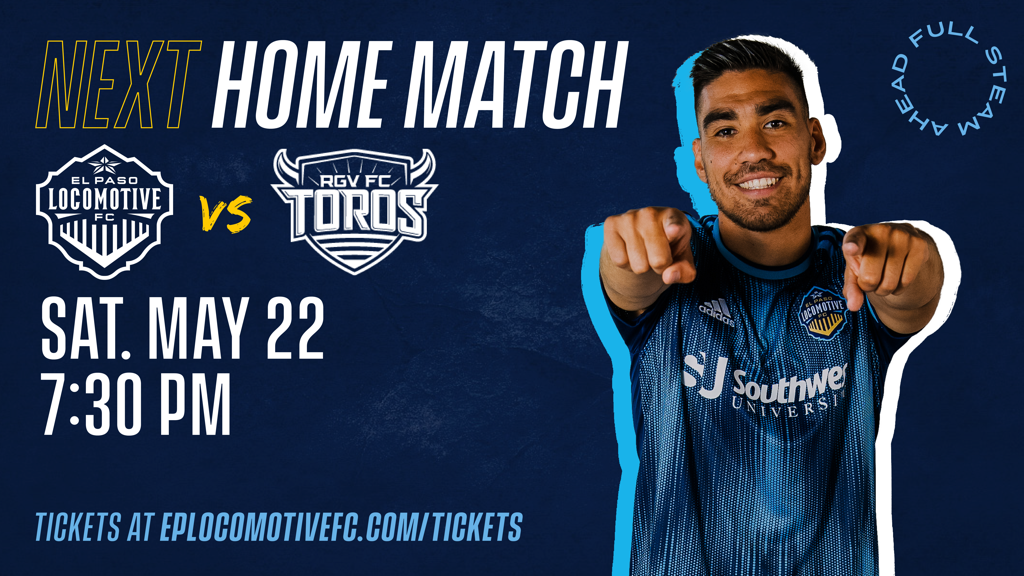 El Paso Locomotive FC is set to play its second match of the 2021 USL Championship regular season against its Texas rival, Rio Grande Valley FC, in a revival of the Copa Tejas. Kickoff is set for 7:30 p.m. MT on Saturday, May 22 at Southwest University Park. Tickets at a limited capacity are available online at eplocomotivefc.com/tickets or by calling 915-235-GOAL.

Two weeks ago, Los Locos kicked off its season against New Mexico United with a thrilling contest. After going down a goal in the 57th minute, courtesy of United’s Devon Sandoval, Locomotive rallied behind late-game substitutions to earn the point at home. Forward Leandro Carrijo equalized the scoring in the final minute of stoppage time to earn the point at Southwest University Park after Midfielder Diego Luna set Forward Aaron Gomez up for the header with a beautiful cross in his professional debut.

The 1-1 draw against New Mexico United continues the undefeated streak Locomotive has built since July 24. Extending the record to 8-0-1, including the playoff wins against FC Tulsa and New Mexico, Locomotive now tests its home record against a Rio Grande Valley side that has so far been a strong contender in 2021. The Eastern Texas side has opened the 2021 USL Championship season undefeated, claiming 1-0 victories over New Mexico and San Diego Loyal before taking a 2-1 win over San Antonio FC last weekend. In the 2020 season, Locomotive and RGV only met once, kicking off the return to play with a Locomotive 1-0 win on July 11.