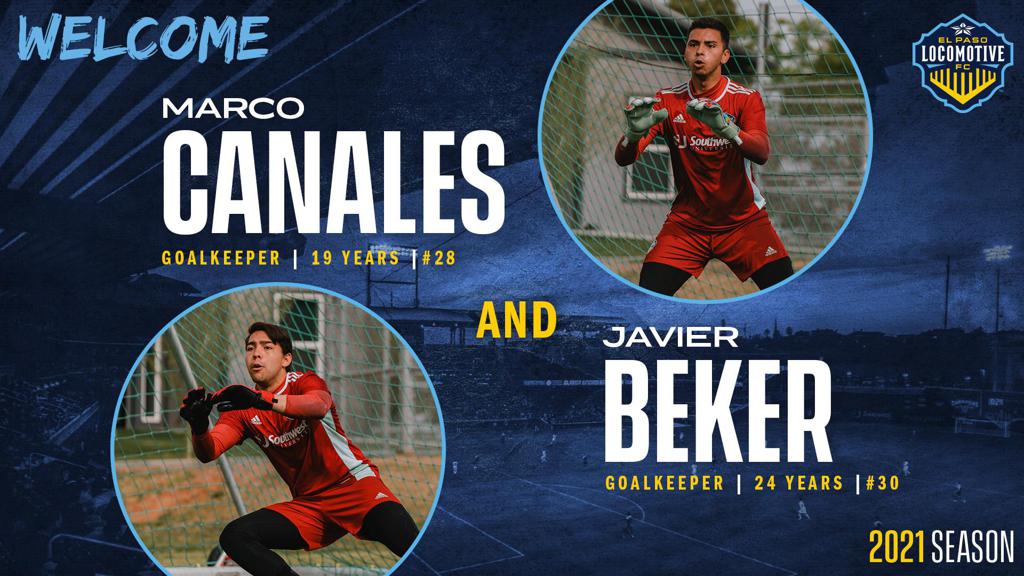 El Paso Locomotive FC announced today it has added two El Paso natives to its roster with Goalkeepers Marco Canales and Javier Beker. Canales comes to Locomotive on loan from its Borderland sister club, FC Juarez while Beker joins on a professional contract with his hometown club. Both signings are pending league and federation approval.

“We are very happy to fill out our goalkeeper department with Marco and Beker,” began Mark Lowry, Head Coach and Technical Director.

Canales, 19, joins El Paso Locomotive on loan from its sister club in Liga MX, FC Juarez, furthering the relationship between the two clubs. A graduate of Cathedral High School in El Paso, Canales is no stranger to the Borderlands region. The El Paso native boasted resounding success for the FC Juarez third division team, leading the team on an unprecedented win streak and championship run.

“Marco joins us on loan from our sister Club, and friends at FC Juarez Bravos, where he has been for the past couple years,” said Lowry. “Both Clubs believe this is a good opportunity for Marco to develop his game and compete on a day-to-day basis. He is young but has a lot of talent and a high ceiling for growth. We look forward to seeing his trajectory over the course of this season.”

Beker, 24, is a familiar face to Locomotive having spent time with the team during training sessions throughout the first two seasons. Training under Locomotive Goalkeeper Logan Ketterer and Goalkeeper Coach JC Garzon, Beker has been working towards earning a Locomotive contract since the 2019 expansion team began play. An El Paso native himself, Beker has played locally with club teams in the area.

“Beker has been training with us for almost two years now,” said Mark Lowry. “It gives me great pleasure in bringing him on board as a more permanent member of the group. He deserves this chance, he is proud to represent his city, and we love having him here.”

Join El Paso Locomotive FC when it returns to action for its third season in the USL Championship in 2021! Lock in your seats by visiting eplocomotivefc.com/seasontickets or calling/texting 915-235-GOAL and enjoy world-class Championship soccer at Southwest University Park!