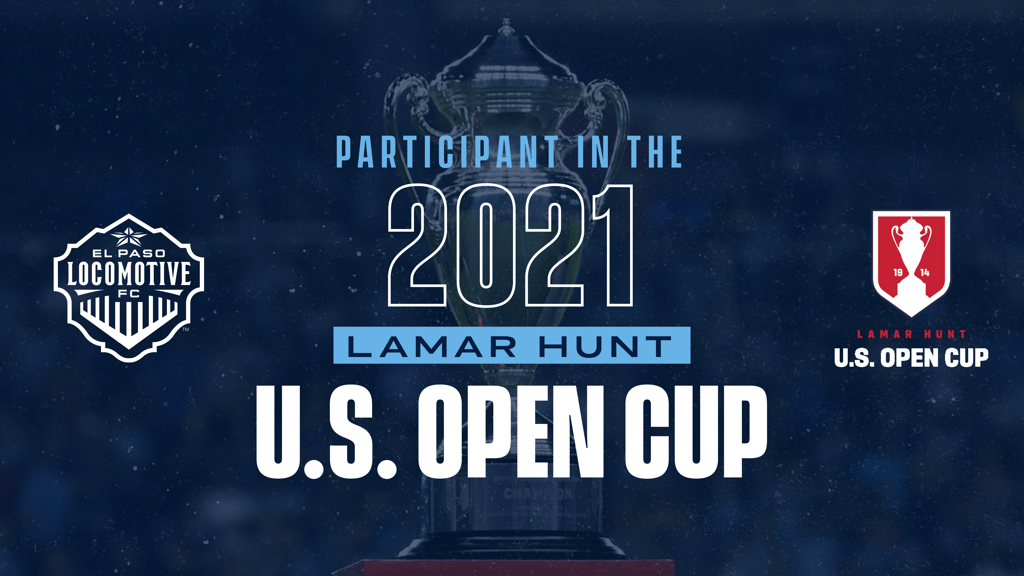 EL PASO, Texas – March 29, 2021 – El Paso Locomotive FC, alongside the United Soccer League, announced today it will be one of only four USL Championship teams to compete in the 2021 Lamar Hunt U.S. Open Cup. Following a restructuring of the tournament, Locomotive will enter in the Round of 16 and will compete with teams from Major League Soccer, USL Championship, and USL League One.

“We are incredibly excited to be a part of the 2021 U.S. Open Cup,” said Locomotive Head Coach and Technical Director Mark Lowry. “Our body of work over the first two seasons as a Club has been second to none, from winning our group in 2020 and reaching two Western Conference finals, these are achievements that we are proud of. But I want to be very clear, we are not content, we want silverware, and we want to be considered one of the top teams in the Country. We see the Open Cup as an opportunity to do this, it’s a tournament we believe we are capable of going far in and will be going full steam ahead to try and get our hands on that historic trophy.”

El Paso Locomotive joins the 2020 USL Championship Conference Finalists, Phoenix Rising FC, Louisville City FC, and Tampa Bay Rowdies as representatives of the league following a Championship Board of Governors vote. Locomotive previously competed in the 2019 edition of the oldest ongoing national soccer competition, falling in the second round. The El Paso side was set to compete in the 2020 edition before its postponement due to the COVID-19 pandemic.

El Paso Locomotive is no stranger to tournament-style play, advancing to the USL Western Conference Final in its first two years of play. Of the USL Championship teams entering the Open Cup, only Louisville City FC has played more minutes in the USL playoffs, however, Los Locos lead the pack in goals scored with 11.

At its meeting last week, U.S. Soccer’s Open Cup Committee made the difficult decision not to hold the tournament’s previously planned Opening Round, which was scheduled for May 4-5. The Committee cited the challenges still in place due to the COVID-19 pandemic given the competition is played across the country involving clubs from multiple professional and amateur divisions and leagues. The tournament is now structured to feature 16 teams which will play four rounds in pursuit of the 2021 Lamar Hunt U.S. Open Cup title.

A tentative draw for the Round of 16 is set for April 7, and the Committee will next review matters by April 19 to confirm whether the Open Cup can commence with the Round of 16 on May 18-19 for its 107th edition. All matches from the Round of 16 through to the Final will be shown live on ESPN+.