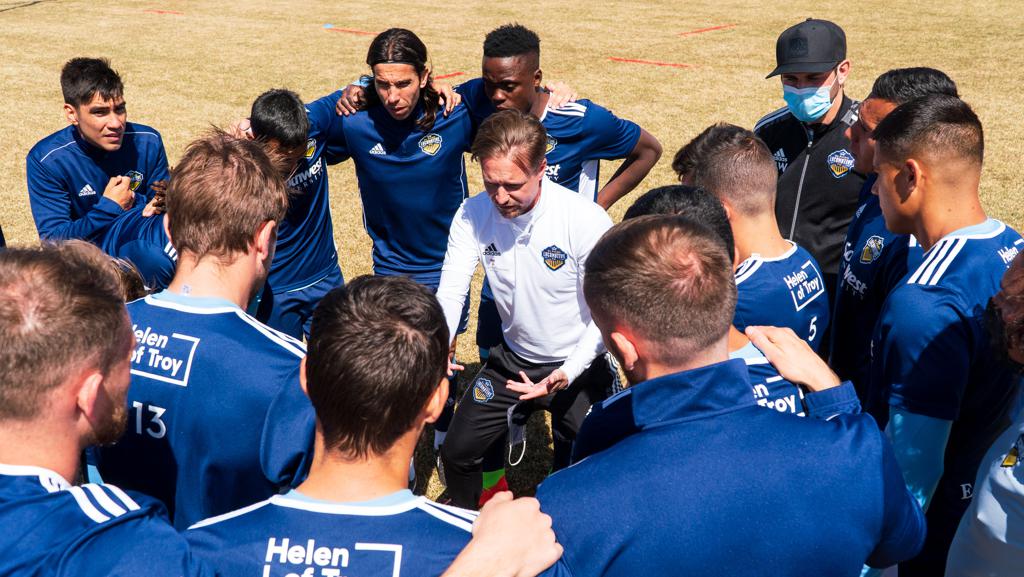 El Paso Locomotive FC kicked off its 2021 preseason with a 2-1 victory over its Mountain Division and regional rival, New Mexico United on Saturday in Albuquerque, New Mexico. A Trialist with the squad found the first goal just before the halftime break while Forward Leandro Carrijo recorded the game-winner in the second half to start off pre-season on the right foot.

“I really liked the energy and the commitment of the group,” stated Head Coach and Technical Director Mark Lowry. “There were tough conditions with the wind which played a factor. Sand blew across the field at times and the field was difficult to play on – it was sticky, bumpy and dry. It made the game a little slow when we wanted to play a high tempo game. The guys showed resiliency to get through the opening 15-20 minutes to figure out the conditions. We were honest to who we are and to true to the values we have as a team. It turned into playing some really good football. We go down a goal and to come back, that character is always good to see and I think we were worthy of the win.”

The contest started on the right foot for Locomotive, who showed their pedigree in the attack with new signings, trialists, and kids from the Locomotive Youth Academy making their mark throughout the 90 minutes. Early on, Locomotive earned a penalty kick that the New Mexico United goalkeeper put a stop to. Just moments later, United earned a penalty kick of their own which Devon Sandoval converted for an early lead.

It was lead that wouldn’t last however, when a Locomotive Trialist beautifully curved the shot to the top corner of the goal just before the halftime break to even out the scoring. With a fresh lineup in the second half, Forward Aidan Apodaca showed his versatility on the attack working in tandem with Midfielders Dylan Mares, Nick Ross, and Carrijo with quick passing to pressure the United defense. In the end, the quick passing sent United on their heels to allow Carrijo to clean up a spill and convert the game-winner for the 2-1 victory to start the 2021 year off right.