A Pathway to Pro from Madrid to El Paso

"I've Always Been Close to a Ball. Always Either Watching or Playing Soccer." 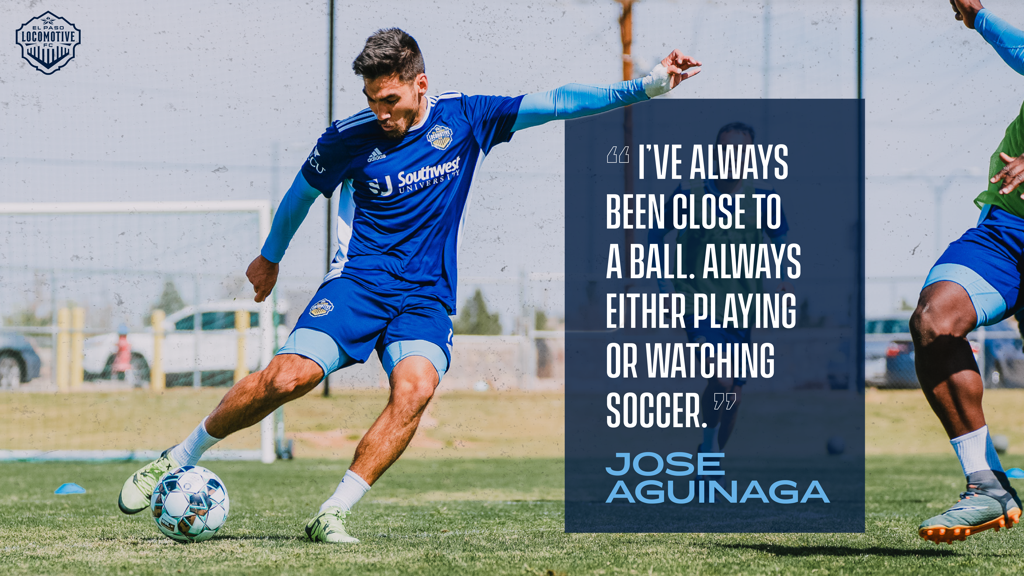 Hailing from Madrid, Spain, ‘futbol’ was something that Locomotive Midfielder Jose Aguinaga knew all his life. From an early age, Aguinaga had always been playing or watching soccer. Growing up in a house of all boys, there was always a ball around meaning a game of pick-up was likely to break out at any moment.

The path-to-pro for the 25-year-old Midfielder was one that his father wished he had growing up. His father – an immigrant from Paraguay to Spain – served as an inspiration for Jose on his soccer journey. Throughout his childhood, Jose watched his father and Locomotive’s own Yuma play in Spain, all while looking up to legends in the soccer world such as the great O Fenômeno Ronaldo. Surrounded by the sport, Aguinaga found himself thinking ‘I want to do that.’ It was a journey made easier being born in Spain as Jose was given a wide array of opportunities that his father didn’t have in Paraguay.

“I was just lucky,” Aguinaga said. “I was lucky enough to be in Madrid, a city where there are many academies and football is so big. Since I was five- or six-years-old, I was playing in academies.”

Madrid boasts some of the greatest academies in the world, including the famed Real Madrid. Jose Aguinaga had the opportunity to learn and play alongside the best as a kid, playing at Rayo Vallecano for five years before making the leap into the famed Real Madrid Academy.

After a few years in the Real Madrid Academy, Jose joined Getafe CF to round out his youth career. Now 18-years-old, the native Spaniard listened to his father’s wishes to begin studying, balancing a school-life with his dreams of going pro in the soccer world.

“I worked hard, but it was hard for me to combine both,” said Aguinaga. “Towards the middle of the year, Getafe decided I would go back to the U-19s, who would train in the afternoons. I couldn’t just move my classes to the mornings, so they forced me into deciding between them and school and it made me kind of mad.”

Being forced to make a decision, Jose started searching for a place where he could complete his studies while following his path-to-pro. The United States offered what he was searching for, and when he heard of the opportunities, he knew it was where he wanted to go.

Jose joined Rider University in Lawrenceville, New Jersey, studying with a scholarship in math while playing for the men’s soccer team, the Rider Broncs. There he played for four years while studying mathematics and learning a new culture and a new language. At the same time, Aguinaga found opportunities to train with the Seattle Sounders and New York Red Bulls U-23 teams, gaining experience with Academies from some of the top MLS teams. Once he had earned his bachelor’s degree in mathematics, Jose earned his break, being picked in the 2018 MLS Superdraft by New York Red Bulls.

Jose’s path-to-pro was complete, being officially signed to a professional club. Jose made the move to Phoenix Rising FC, helping the team in beating the North American win-streak record in 2019 and aiding the side to a Western Conference Final win in 2020, before ultimately making the jump to Locomotive.

While the path-to-pro worked for Jose Aguinaga, he was prepared to stay in the United States with his degree, working in a form of computer science had it not worked out. However now, he has his eyes set on the prize with Locomotive in its third USL Championship year, aiming to add another Western Conference title win to his name.