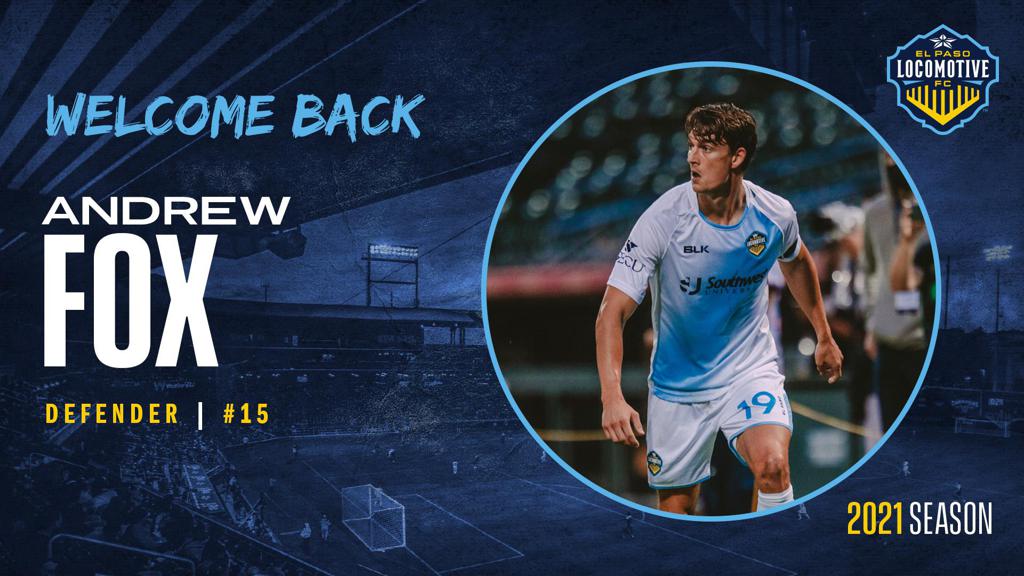 El Paso Locomotive FC announced today it has re-signed Defender Andrew Fox for a third season on a two-year deal, pending league and federation approval. Fox is the 13th Locomotive player returning from the 2020 squad that reached a second consecutive Western Conference Final appearances and the 8th player to return for a third season.

“It’s great to have Foxy back on a multi-year deal,” shared Mark Lowry, Locomotive Head Coach and Technical Director. “He is a very ambitious person, always striving for the best and is desperate to win things here in El Paso. He is another who embodies the team-first culture we have cultivated over the past two years; he knows what we expect. He understands what it takes to play in this team, and he is another player I have absolute trust in.”

Over the last two years, Fox, 28, has become a mainstay in Mark Lowry’s system, filling the left-back position with a veteran presence. Fox made 30 overall appearances with 28 starts in the 2019 inaugural season, recording an assist and two goals, including the opening goal of the 2019 Western Conference Final. The English defender built on the successful first season with 13 league appearances and 12 starts, earning a single goal to help lift his side to a playoff run that would result in a back-to-back playoff Western Conference Final.

Before joining El Paso, the veteran defender earned experience abroad playing in the League One and League Two divisions of England and Sweden. In 2015, Fox finished his college career while playing with USL League Two side Midland-Odessa Sockers before making the professional jump to EFL League One with Peterborough United, Kidderminster Harriers, and EFL League Two side Stevenage.  Fox took a short stint in Sweden playing with AFC Eskilstuna before playing a year in Grimsby Town before ultimately signing with El Paso Locomotive in 2019 for the club’s inaugural year.

El Paso Locomotive FC's roster as it currently stands headed into the 2021 USL Championship season, listed alphabetically by position, is below: