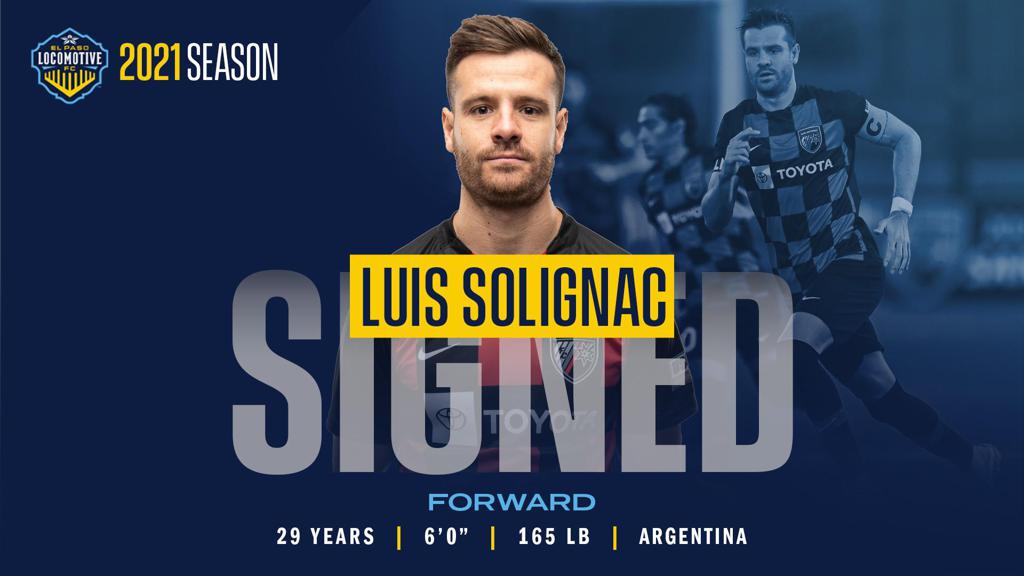 “We have been very patient with our recruitment of attackers this season,” stated Head Coach and Technical Director Mark Lowry. “Firstly, we place a lot of demands on our forwards when it comes to defending and running for the team, so we need a certain profile of player.  Secondly, over the first two seasons, our conversion rate hasn’t been at the necessary level. We have created many chances, control most games we play, and even though we win a lot and have been successful, we want to elevate to another level again in 2021. Luis has the necessary qualities to help us achieve this. In our opinion, he was the best forward in the Western Conference last season. When preparing to play against him he gave us more problems than any other forward and made our defender's lives very difficult. He is a proven goalscorer at all levels, had a high conversion rate in 2020 and we are excited to welcome him here to El Paso and into a Club that demands excellence and progress every season.”

Solignac, 29, joins Locomotive after an outstanding 2020 season with Copa Tejas rival, San Antonio FC, where he tied the Championship’s record for fastest goal with a ninth second stunner against Rio Grande Valley FC. The former San Antonio Captain went on to lead his side with eight goals and three assists across 16 matches played to put the club on track for a 10-game win streak, finishing at the top of Group G. Prior to the condensed 2020 USL Championship season, the 29-year-old forward played five years in the United States topflight, Major League Soccer, recording nine goals in 58 league games with Chicago Fire and three goals in 33 appearances with Colorado Rapids.

Solignac adds his name to the list of Locomotive players that boast world experience, having made his professional debut in his native Argentina for Club Athletico Platense, earning 14 appearances and four goals. While signed with Platense, the clinical striker went on various loans around the world, playing with SC Braga (Portugal), Club Athletico Banfield (Argentina), Djurgarden (Sweden), and most successfully with IFK Mariehamn in the Finnish first division. Solignac found 20 goals in 41 league matches with IFK before being signing with Nueva Chicago of Argentina, earning 10 appearances all of which were starts.