Getting to Know: Aidan Apodaca 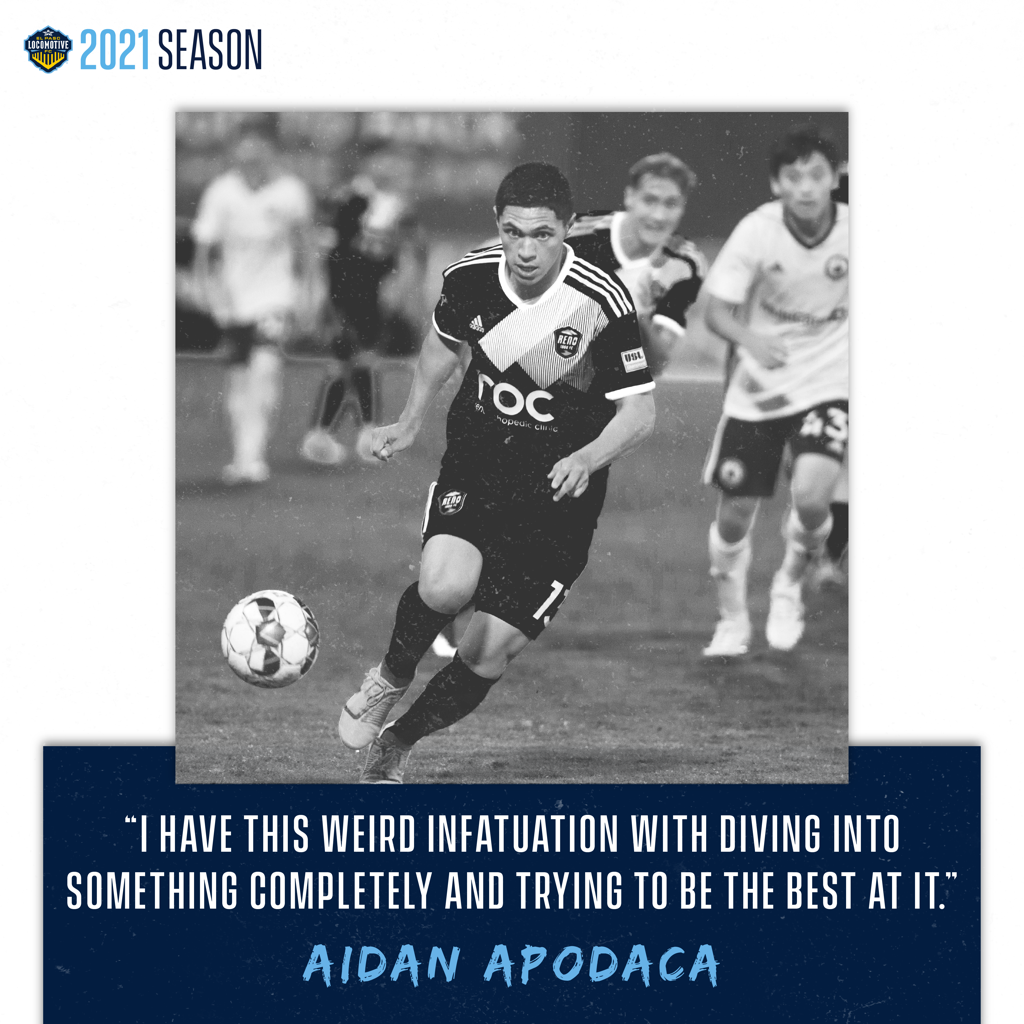 El Paso Locomotive added an extra sting to the attack in the final third of the soccer pitch, bringing former Reno 1868 striker, Aidan Apodaca, into the fold. The 24-year-old California native carries a mentality and a drive to help lift Locomotive to the next level, hoping to bring silverware to El Paso - a place that he knows as a familiar home-away-from-home.

Apodaca was raised with an athletic spirit, watching his brother play soccer from the sidelines before began playing both soccer and baseball himself recreationally around seven years old. While he admitted himself that he didn’t really get into baseball, his parents saw the young Aidan’s natural athleticism and talent at soccer, giving him the opportunity to enroll in the American Youth Soccer Organization (AYSO) to jump-start Aidan into what would become a career in professional soccer. Seeing success at the youth club levels, Apodaca continued in his drive, continually taking his soccer to the next level.

“I’m the first in my family to take it as far as I did,” shared Apodaca. “When I was about 10 or 11, I started playing for my first club team. I did pretty well and moved on to another team - FC Golden State - that was when I started stepping up my game and realized ‘this is more than just a game, it’s a future I could have.’ I started getting looked at by colleges and that’s where my route went.”

After his time in high school, the California born striker was picked up by California Baptist University, where he played for four years while studying health science and kinesiology, citing that if he wasn’t playing soccer, he would want to help athletes with injuries. Playing for four years with Baptist University, recording 48 goals across 68 appearances, Apodaca took another leap being picked by MLS side Philadelphia Union in the 2018 MLS SuperDraft.

“During my senior year again, it happened all over again where I was doing well and realized this could go further than college.  I could keep going and make a career out of it," said Apodaca.  "In my senior year, my game landed me in Philadelphia by getting drafted in by the Union, which was something I wasn’t really expecting. I’m just happy to be living my dream, to keep pushing, to keep getting to the next level, and seeing how far I can take it.”

Since moving to the higher levels of U.S. Soccer, Apodaca moved into the USL Championship, establishing himself as one of the most clinical strikers in the league. During the 2020 Regular Season, Apodaca led the Reno charge with a goals per minute average of 72.7, with a shooting accuracy of 87.5% so help lift the Nevada team to the top of the league and a Regular Season Title win.

“I have this weird infatuation with diving into something completely and trying to be the best at it. I guess that’s a good quality to have,” shared Apodaca with a smile.

That “be the best” mentality is something that Apodaca is carrying with him to El Paso - a place that he familial connection to.

“My dad was born and raised in El Paso,” Apodaca said. “I visited back when I was younger. It’s been some amount of years since I’ve been back, but it’s cool to come back to a place that I’ve become familiar with and the place where my dad grew up. I still have family here, so I’m happy that my family can get a glimpse at what I’ve been doing and seeing me all grown up since it’s been so long. I’m excited about that.”

Apodaca brings that same "be the best" mentality with him into other areas of his life as well. Diving headfirst into his hobbies, the 24-year-old striker has picked up fly fishing during his time in Reno, taking advantage of the Truckee River - one of the best fly-fishing spots in the West. Since Reno 1868’s folding in early November last year, Apodaca returned to his home state of California where he shifted that focus to golf, practicing his swings and chip shots when he isn’t kicking a soccer ball. Coming to El Paso, the young forward is looking not only to improve his skill with the soccer ball but to hit the links in El Paso and see what else the Sun City has to offer.

Aidan Apodaca’s athleticism and mentality to win and be the best perfectly fits into the culture that the man at the helm, Mark Lowry, has built in the locker room. Apodaca adds a clinical finish to the final third and could provide the edge El Paso may need to break past the 2021 Western Conference Final and into a USL Championship title win.

“Seeing the success that Locomotive has had over the past two years in the league, it’s been amazing,” Apodaca shared upon arriving in El Paso. “To be part of that team and culture while building on what has already been laid, I’m looking forward to helping bring a trophy to El Paso.”