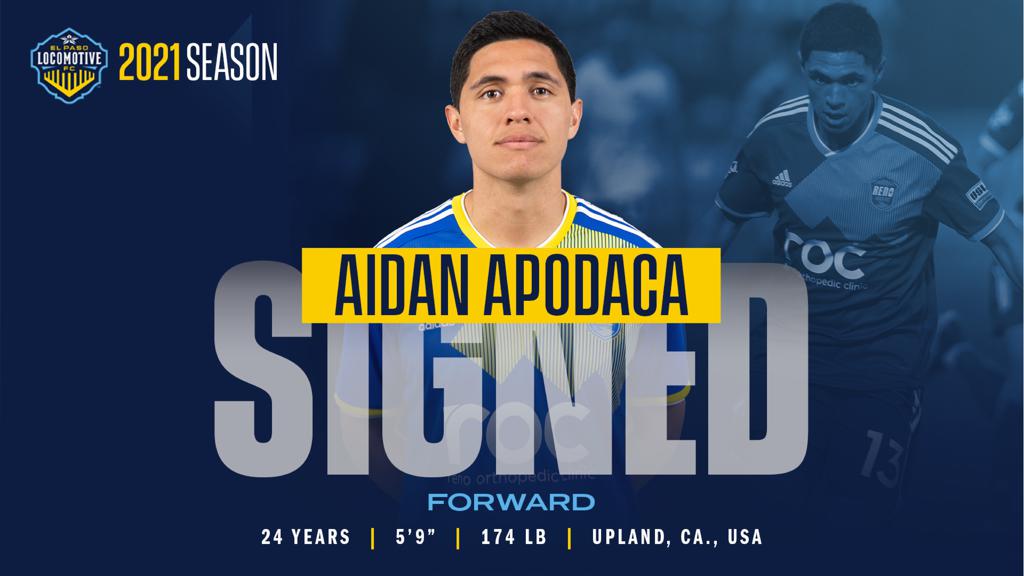 “Aidan is a player that caught our eye over a year ago,” said Head Coach and Technical Director Mark Lowry. “His pace, enthusiasm for running and constantly harassing defenders makes him a dream player for our system. His goals per minute ratio is one of the best in the USL over the past two seasons, and his age means his room for growth is an exciting prospect. I expect him to fit in seamlessly with our demands and the spirit of the group. “

Apodaca, 24, joins Locomotive with three years of experience in the USL Championship having made 16 appearances with Bethlehem Steel in 2018 and 25 appearances across two seasons with Reno 1868 FC. Establishing himself as one of the most clinical forwards in the league, the Upland, California native had a hand in lifting Reno to the top of the USL Championship with three goals over 11 appearances in 2020. Boasting a goal per minute average of 72.7 minutes and shooting accuracy of 87.5% in 2020, the young American has the qualities to provide an exciting, yet dangerous, element to the Locomotive attack.

Prior to his professional career, Apodaca played collegiately with California Baptist University where he made 48 goals across 68 appearances from 2014-17.

“I’m super excited,” shared Apodaca. “Seeing the success that Locomotive has had over the past two years in the league, it’s been amazing. To be a part of that team and culture while building on what has already been laid, I’m looking forward to helping bring a trophy to El Paso.”

Apodaca now joins Coach Lowry's world-class cast of players as the latest new signing for the 2021 USL Championship season. El Paso Locomotive is currently working on additional player announcements for the 2021 season and will announce the renewals and new signings once they are confirmed.