The Veteran Irish Midfielder Continues to Provide Leadership and Vision 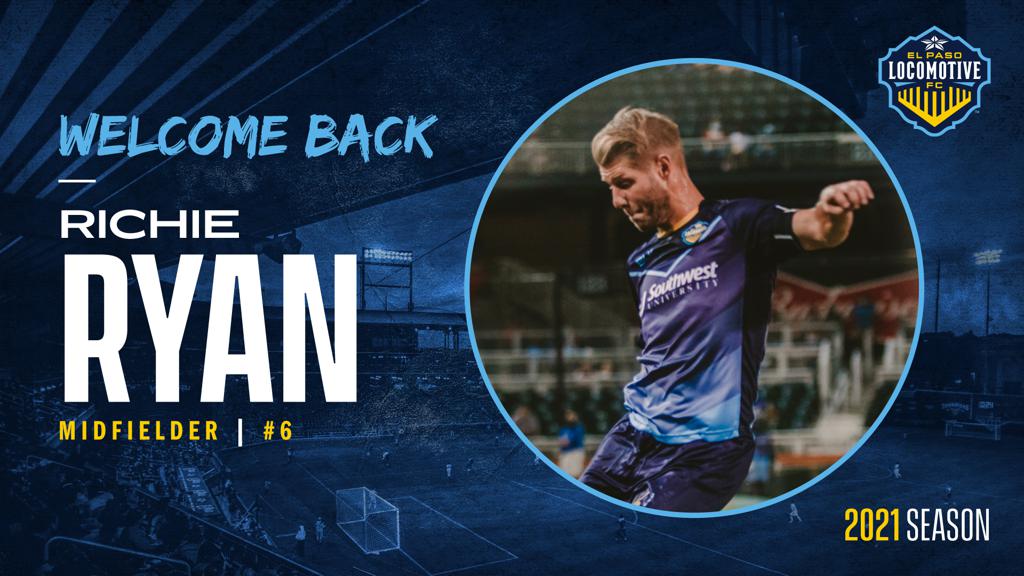 “Richie is the backbone of this team,” stated Mark Lowry, Head Coach and Technical Director of El Paso Locomotive. “On and off the field he drives our culture home every single day. He always puts his teammates first, the team’s success over his own, and that’s the hallmark of a true leader. He proved again last season how good of a #6 he is. He wants the ball in any situation, is always available, never gives it away but always seems to find a forward pass. He is the type of player and has the type of qualities that you still can’t replace in this league. He is priceless for us, and we expect that level again off Richie in 2021.”

Ryan, 35, joined Locomotive FC in January before the 2019 inaugural season, reuniting with Coach Lowry after having worked alongside each other at Jacksonville Armada in 2016. Since signing with Locomotive, the veteran Irish midfielder has aided the Sun City club with a level of leadership that few bring to the table. Over the first two seasons with Locomotive, Ryan has helped lead the team to two back-to-back appearances in the Western Conference Final, pulling the strings from the defensive midfield with an 88% passing accuracy. Ryan came up big in crucial moments, converting his penalty shots against New Mexico United and FC Tulsa to help advance Locomotive in its historic second playoff run. Prior to his time in El Paso, Ryan played at various levels in England before earning extensive experience in the Scottish Premier League. Ryan made the jump to the NASL in 2014 where he found success in 2017 with Miami FC finishing top of the league and repeating the performance with FC Cincinnati in 2018 in USL.

"I'm very excited to be back at the club," said Ryan. "I've loved the two seasons we've had, and I feel like we got stronger last season on and off the field as a club. I want to try to help as much as I can to make it happen again and hopefully win the trophy that we've been so close to in the first two seasons. El Paso has been home for two years for my family and me. We are extremely happy to be back for our third year."

Richie Ryan is the latest of the core group from the 2020 USL Championship season to return for Locomotive FC, joining the likes of Logan Ketterer, Bryam Rebellon, and Chapa Herrera, among others. El Paso Locomotive is currently working on additional player announcements for the 2021 season and will announce the renewals and new signings once they are confirmed.