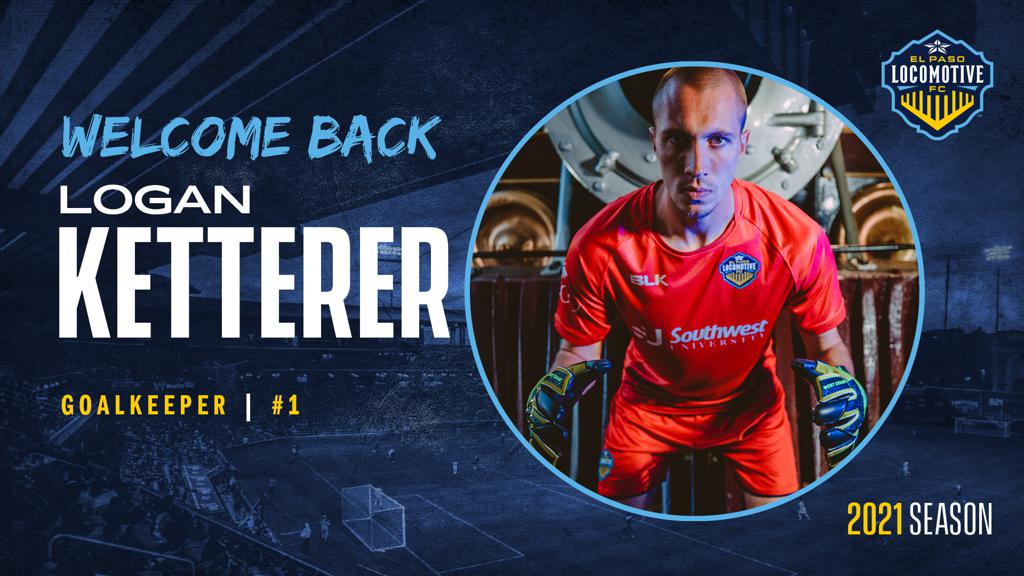 “We were very happy with Logan’s progression this past season in what was only his second year as a full-time number one,” said Head Coach and Technical Director, Mark Lowry. “He understands what we want from our goalkeepers, and the demands we place on him I would say are greater than the demands of most goalkeepers throughout the league. He is required to be involved in the whole game, starting our build-up and sweeping up defensively higher up the field than most GKs tend to go. That is not easy, and this past season he grew in stature and confidence performing those duties. He has been part of what has been one of the best defensive units in the league over the past two seasons, and we expect this again in 2021.”

Ketterer, 27, joined Locomotive ahead of the inaugural 2019 season, immediately cementing himself as the man between the pipes for Sun City. In 2019, Ketterer established his name as one of the best goalkeepers across the league, earning fourth in the league in shutouts with 12, a goal against per 90 average of 1.03, and a 67% save percentage. The Madison, Wisconsin native only improved in his second season under the Locomotive banner, topping the league in shutouts with 8, while lowering the goal against average per 90 to .87 and raising his save percentage to 78%.

A proven shot-stopper, Ketterer has a read for his opponent, stopping an impressive 46% of his penalties faced through the 2019 and 2020 regular seasons. Logan Ketterer’s ability to stop a penalty played a vital role in the historic second season run to the Western Conference Final, making key stops in penalty shootouts against FC Tulsa and New Mexico United; securing a Locomotive appearance in the Final against Phoenix Rising FC. Prior to his time with Locomotive FC, Ketterer was signed with MLS side Columbus Crew, making a single appearance in the U.S. Open Cup against Chicago Fire.

"I'm extremely excited to be back in El Paso for another season," shared Ketterer. "We are on the brink of something truly special and we have some unfinished business we want to handle. El Paso as a city has taken me in like family. I couldn't be more grateful to everyone in the club, the office, all the players, and of course the incredible fans. I can't wait to play in front of a packed stadium and 8th Notch again. It's the fans that make a club special and we certainly have that here in El Paso."

Logan Ketterer serves as the latest Locomotive member to be announced as a returning player for Coach Lowry’s star-studded roster, joining Dylan Mares, Bryam Rebellon, Eder Borelli, Macca King, Leandro Carrijo, Nick Ross, Yuma, and newcomer Niall Logue. El Paso Locomotive is currently working on additional player announcements for the 2021 season and will announce the renewals and new signings once they are confirmed.