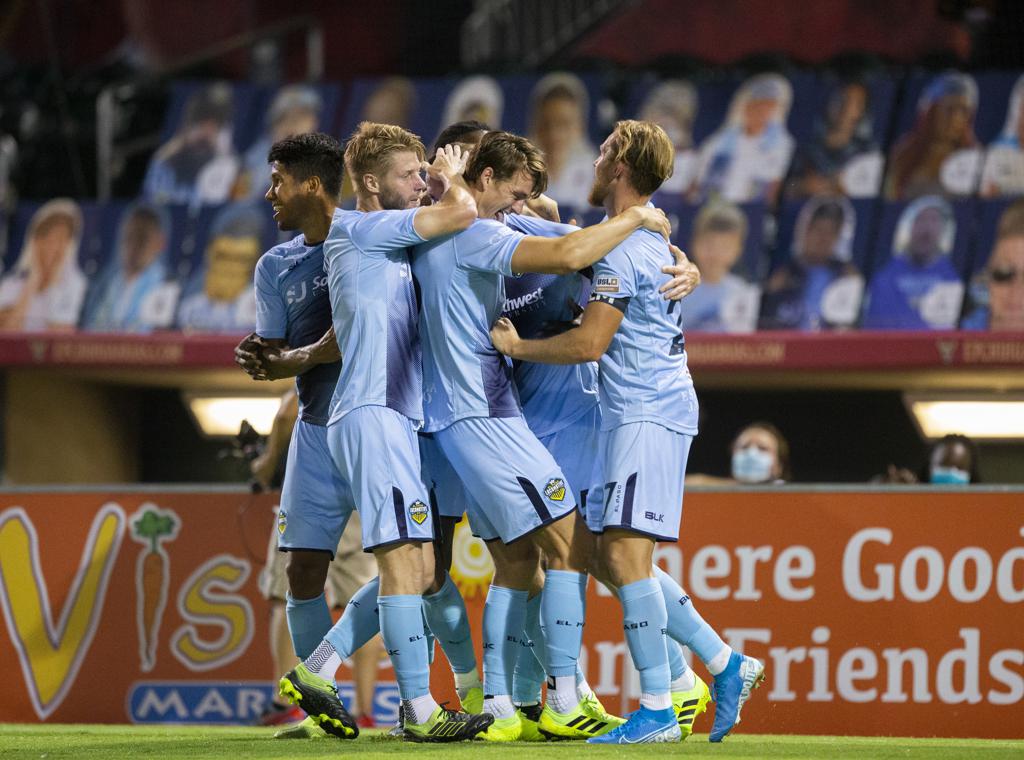 El Paso Locomotive FC (4-2-3, 15 points) picked up the full three points off a 2-1 victory over Real Monarchs in front of a sold-out capacity crowd of 801 fans on Saturday. Brent Kallman and Bryam Rebellon put away a goal apiece for Locomotive FC.

“We have a great group of guys,” stated Head Coach, Technical Director Mark Lowry. “It was a real sucker punch that goal because we didn’t see it coming. It kind of came out of nowhere. We were 1-0 up and we were the team pushing for the second. The guys then composed themselves for a couple minutes and got their confidence back and broke down the left, Omar used his pace and picked Bryam out of the back and he tops it off with a good goal. The arrival, the touch the finish. The win was fully deserved but we might have made it hard on ourselves.”

Through the opening 45 minutes, both sides fought for opportunities for the opening goal with the first real chance coming through the Monarchs side with a rifled blast that Logan Ketterer read down the line for the big save. Locomotive FC responded in kind, as late in the first half, Omar Salgado found a shot on an open goal, but was denied by the pace of the Monarchs defense. In the end, the tight tug-of-war through the midfield put both sides level at the halftime break.

After the break, Locomotive FC came out of the locker room with intensity, peppering the Monarchs goal with shots that would end just wide of the net or saved big by Monarchs goalkeeper Jimmy Slayton. The resulting corners were capitalized by Kallman who put away the picture-perfect header to give Los Locos the advantage. Monarchs responded in kind in the 81st minute when Coffee cleanly pulled one back on 1-on-1 situation. Locomotive FC had the last laugh as Rebellon picked up the pass from Salgado, before cutting middle and masterfully putting in the game-winning goal to secure the full three points.

UP NEXT: Locomotive FC goes back on the road to take on Colorado Springs Switchbacks FC in round 3 of 4 for the 2020 USL Championship abbreviated season. Kickoff from Weidner Field is set for Wednesday, September 2 at 7:00 p.m. MT.

ELP: Brent Kallman (Dylan Mares), 53th minute – Capitalizing off a corner kick opportunity, Mares sent the ball to the far post where Kallman stood tall. Isolated without a defender, Kallman headed the ball in to the near post past Monarchs ‘keeper Jimmy Slayton to put the Locos in the lead.

SLC: Kyle Coffee (Dayonn Harris), 81st minute – In a quick transition, Harris sent a perfectly weighted ball through the gaps of Locomotive FC’s defense right in the path of Coffee. 1-on-1 with Ketterer, Coffee cleanly took the shot to the left, finding the back of the net for the equalizer.

ELP: Bryam Rebellon, 86th minute – Picking up off a botched clearance from the Locomotive FC backline, Rebellon made quick touches to settle the ball before masterfully sending the ball home into the far net for the game-winning goal.

- For the first time since the 3-0 win over Sacramento Republic FC in the 2019 Western Conference Semifinals, Southwest University Park welcome fans back into the stadium at a sold-out capacity crowd of 801.

- MLS loanee Brent Kallman opened his goal-scoring ticket, putting away the opening goal of the game in the 53rd minute.