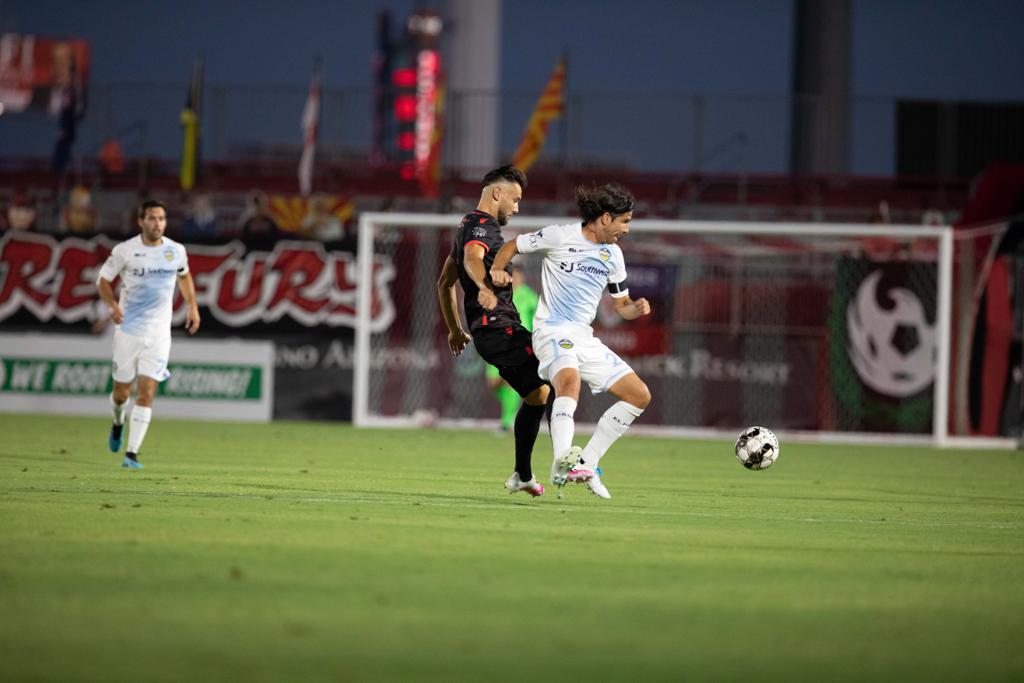 Locomotive started the game on the right foot, holding off Phoenix Rising pressure to cut out the passing lanes while maintaining crisp passing of their own. The passing paid off in the 12th minute when a perfectly weighted through ball from FW Dylan Mares found Gomez who tapped the ball just under the Phoenix ‘keeper. The advantage didn’t last long as moments later Rufat Dadashov buried a penalty kick opportunity. While Locomotive fought to get to the attacking third, Rising FC took control, finding powered shots to increase their lead from Solomon Asante and Junior Flemmings to increase their lead before the break.

The second half saw more of the Rising final third, however the ironclad Phoenix defense put ends to Locomotive offensive runs in the early stages. As the second half began to open up, Rising FC got a run past the Locomotive backline, where GK Logan Ketterer went one-on-one with a perfect stop to the run. While the chances kept coming for Los Locos, the shots would fly wide leaving the El Paso side wanting as the final whistle blew with a 1-3 scoreline.

ELP: Aaron Gomez (Dylan Mares), 15th minute – A beautifully weighted ball through traffic, made it into the path of Gomez at the top of the penalty area. With heavy pressure from a Rising defender, a small tap slipped the ball under Phoenix goalkeeper Eric Dick to tuck away nicely into the net.

PHX: Rufat Dadashov (Penalty), 19th minute – After being Rising FC was lightly taken down within the penalty area, the referee pointed to the spot. Dadashov stepped up, taking a shot that sent Logan Ketterer the wrong way to quickly level the playing field one more.

PHX: Solomon Asante (Rufat Dadashov), 36th minute – In a quick run of play, Dadashov added an assist to his earlier goal with through ball to switch the play to Asante, who took the opportunity to lace a shot into the far netting to double the Rising lead.

PHX: Junior Flemmings (Jon Bakero), 45’+6th minute – Flemmings picked up the light pass from Bakero before cutting in towards the center of the box to get on his left foot. Flemmings powered a shot down the center that shot through Logan Ketterer’s hands and into the net.

- The inter-group contest between Los Locos and Rising FC serves as the third of four matches Locomotive FC will play outside of Group C. Previously, Locos played Orange County SC and Rio Grande Valley to a scoreless draw and a 1-0 victory, respectively.

-  The opening goal from Aaron Gomez marked his second of the season and his second goal in two games after converting a PK against New Mexico United last Friday.

- The result, paired with results elsewhere, Locomotive FC holds above the playoff line as 2nd on the Group C table, one point above Real Monarchs and next opponent, Switchbacks FC.