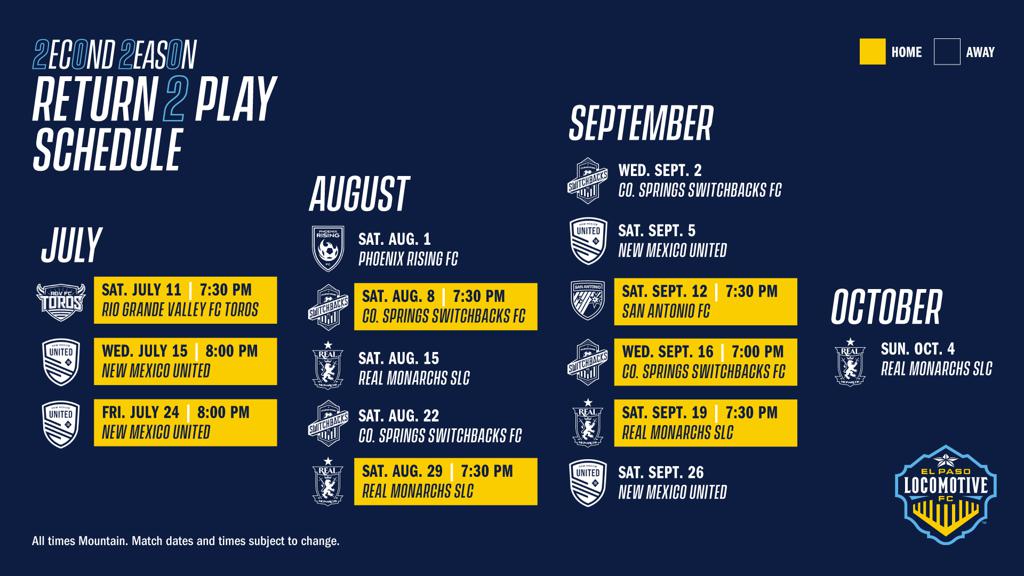 Locomotive is set to play each team in its group four times in a two-home and two-away format, rounding out the remaining three games with inter-group play against Texas rivals Rio Grande Valley FC and San Antonio FC as well as 2019 Regular Season title winners Phoenix Rising FC.

After opening the Return to Play season against RGVFC, Locomotive welcomes New Mexico United for back-to-back games at Southwest University Park on July 15 and July 24. Locomotive FC highlights each Saturday in August starting with a contest away against Phoenix Rising and home and away matches with Colorado Springs and Real Monarchs.

September proves to be the tightest month with 6 games slated. The Locos play on each Saturday while playing Switchbacks FC on two separate Wednesdays, however, September is highlighted with three straight home matches at Southwest University Park. The 2020 season comes to a head with a 2019 Western Conference final rematch on October 4th as Locomotive FC travels to Utah to play Real Monarchs.

Locomotive FC holds a 2-1-3 (9 points) record across all three teams in its group. Throughout its 2019 inaugural campaign, the Locos swept the Colorado series with two wins, recorded a loss and a draw against New Mexico United, while playing to scoreless draws against the Monarchs.

Current 2020 ticket holders will receive additional information via email on how to select tickets to upcoming Locomotive games. To receive the latest details on ticketing, sign up for the waiting list here. To purchase a Cutout Conductor to represent you in the stands, visit the Cutout Conductor website here.