"If you're making stuff, why not make stuff you would want?"

On Platform 915, El Paso Locomotive FC celebrates, features, and highlights what makes the Club truly unique – you, the loyal fans and supporters. This more than just a team. You are more than just a fan. This is a community and a family. 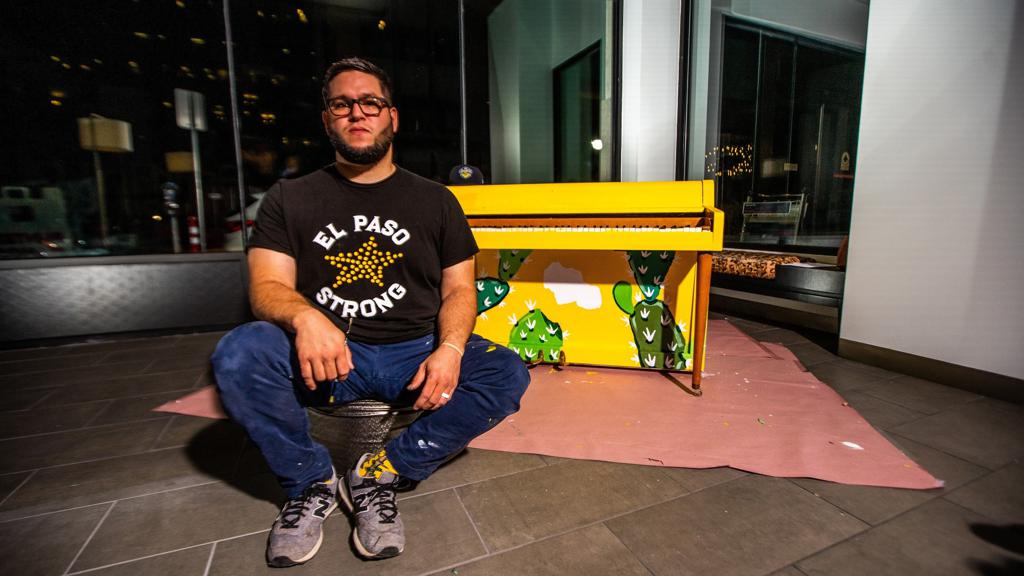 A picture is worth a thousand words.

Attorney by day and artist by night, El Paso native Patrick Gabaldon expresses is love and support for El Paso Locomotive FC through his creative imagery.

“It’s been really cool to be able to show my support for the club through my artwork,” Patrick said. “I just draw, paint, and doodle the things I’m paying attention and listening to. It just so happens Locomotive are important to me and my wife. They are always in my head, thinking about the club and looking forward to game day so I’m always drawing Locomotive stuff. During the season it was even more so. Just waiting for the next game, the next weekend, the next fixture date.”

A soccer fan since the 2006 FIFA World Cup, Patrick is a Day 1 supporter of Locomotive, going as far as calling the team for season tickets before the Club could reach out to him. Patrick saw the opportunity to jump quickly on growing with a new team – a team from his hometown.

Every home game day you can expect to see Patrick taking advantage of the downtown streetcars with fellow fans and getting hyped up at a bar before attending the matches. During the game, Patrick admitted to being glued to his seat as soon as the whistle blows, only to get up to get tacos that he has grown to be addicted to. The fun of gameday doesn’t stop after the match however, as he heads home with fellow friends to talk the game and barbeque.

“That’s what’s incredible about starting a new team,” Patrick explained. “You get the opportunity to learn and grow together. You can make mistakes together and learn what really matters to the community and to the club. It would be a mistake for the team to have started and try to force a culture on the community. Instead, the team showed up and said ‘look we want this to be uniquely El Paso. We don’t want to just have a blank Puma jersey with a sponsor ad on the front.’ We want to have something that is unique to us, because El Paso, the border, and our communities are totally weird.”

The local artist noted El Paso is a unique and beautiful place. A place that is kind of Mexico, Texas, and New Mexico, yet none of those things at the same time. A place of diversity with people from all over but can still come together to build a beautiful community. So, when the club reached out asking him to help in designing one of the first fan-made posters, Patrick jumped on the chance to be at the very least a small part of the Locomotive community.

Since then, Patrick has continued to create posters for each matchday, being featured for the team on multiple occasions, as well as his own designs for fan-made third kits. Patrick’s love for the game and for a local hometown team has served as the inspiration. If there was something he would like to see in the world, he would simply create it.

“If you’re making stuff, why not make stuff you would want? I wanted a cool colorful big Locomotive jersey, so I made one,” Patrick said. “I was just hanging out, watching soccer all day as I usually do when the games were on. I thought ‘Man you know what would be cool? Some third kits! Get crazy!’ Well, I draw, I paint, I do little cartoons, why don’t I just make some and see what people think? It was kind of this pie in the sky idea of what would look cool and we ended up making some that we liked.”

What started as just painting what he liked or looked cool, turned into something far more. Through his art and third kit designs, Patrick looks to capture the beauty of El Paso in the hopes of giving others the chance to see the city through local eyes. Patrick likened it to a prickly pear. From a distance, you may only see the brown against the mountain but as you get closer you begin to see the colors – the blues and greens, the yellows, and purples.

Of course, Patrick Gabaldon admitted he would not be where he is today without the community that has supported him. Patrick said he never would miss an opportunity to thank the amazing people he has met along the way and the opportunities he has been able to have. He wanted to thank all the Locomotive fans for liking and sharing his art as well as the crew at SeriouslyLoco podcast for being a partner.

To see more of Patrick’s artwork, follow him on social media, @GabaldonArt, or visit his website gabaldonart.com.