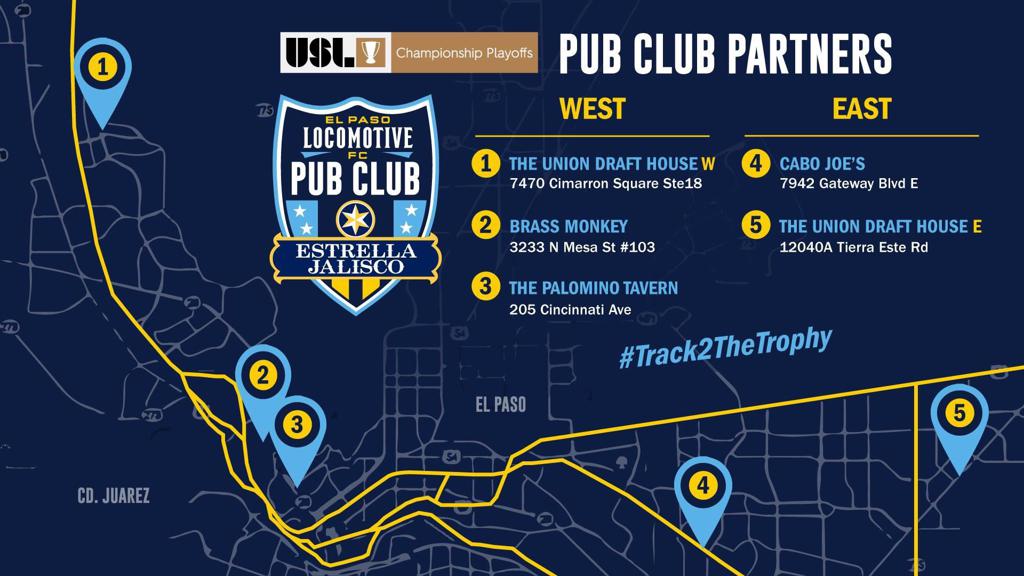 EL PASO, TX – October 21, 2019 – El Paso Locomotive FC will kick off their inaugural postseason campaign by taking to the road and facing Fresno FC on Saturday, October 26th at 8:30 p.m. MT. The USL Championship Playoffs begin this Wednesday with a play in round between the lowest four seeds in the Western Conference.

Locomotive will be hosting five watch parties across the city so fans can come together and cheer on the Locos in every corner of El Paso. The locations are, Union Drafthouse East, Union Drafthouse West, Cabo Joes, The Palomino Tavern, and Brass Monkey. Fans will have access to accompanying drink specials with prizes and Locomotive gear to be raffled off at each location.

“The entire team, coaching staff and front office are thrilled to be the highest seeded expansion team in the 2019 Championship Playoffs as well as the highest seeded Texas team. The team has been playing extraordinary football the last six weeks which we hope will culminate in a road win at Fresno this weekend. We aren’t just happy we got in, we are here to win games and that will be the mentality when we travel to Fresno,” stated Andrew Forrest, General Manager, Business Operations.

El Paso holds the opportunity to host a home playoff match on Saturday, November 2nd if they win in Fresno this weekend, and if Reno loses their match; making Locomotive the highest seed in their section of the bracket. Fans are encouraged to purchase their home playoff tickets by visiting https://www.eplocomotivefc.com/ or calling 915-235-GOAL.

The single elimination tournament concludes on Sunday, November 17th where the last remaining team in the West and East play for the Championship Trophy.