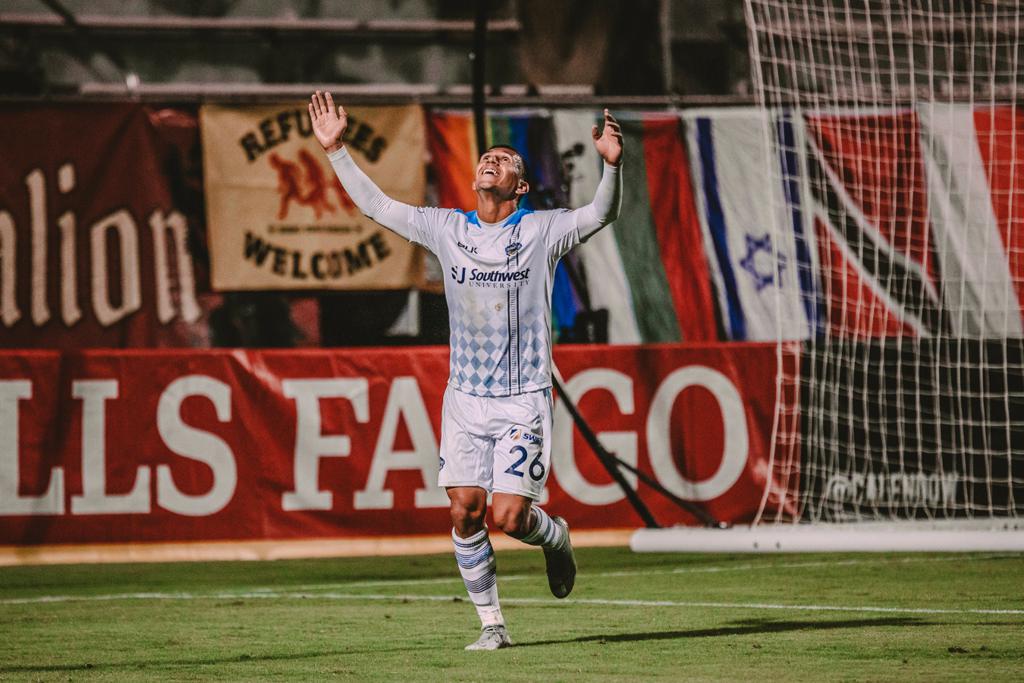 He walks through the door and greets us with a smile, he is quiet and nods with a barely audible “hello”; don’t mistake it for being rude or standoffish, he is soft-spoken and reserved. He lets his playing do the talking, and lately, he’s been talking a lot.

Josúe Aaron Gómez joined El Paso Locomotive in May, by way of loan from FC Juárez in our sister city. Gomez’s journey didn’t begin in the Borderland, but by way of fate, he would find a new home in El Paso with a first-year club. Gomez, like a few of his teammates, left home at a young age to pursue a dream; a dream that would require the youngster to leave home, family and his life behind to join the academy system for Chivas, one of Mexico’s elite clubs.

“It’s much easier for me to stay calm and just enjoy every moment,” Gomez comments when reflecting back on his career and his most recent successes in Locomotive colors. “Even when I was young, and left home at ten, I was excited and just wanted to enjoy the experience. Sure, I missed my family but the academy and the people in it became my family. I always try to see the positive in everything,” the now 25-year-old Gomez tells us. When you watch him play, you can see the way in which he carries himself reflects his personality. He is grounded, collected, and in the moment. His sense of professionalism rivals all around him.

When Gomez began his loan with El Paso, he was getting minutes every few matches and it was evident that he made a difference the moment his studs touched the pitch. On September 4th, he would open his scoring account and prove vital in securing points for the Locos in the draw with Tulsa. Three days later, the young attacker got his first brace, the first goal coming within 60 seconds of him subbing onto the field and his second goal of the night coming in the final minutes of the match. Reflecting his off the field persona, Gomez scooped up the ball, waved to the crowd and proceeded to make his way back to start the game again. No showboating, taunting, or even much cheering; the saying goes, “Act like you’ve been there before” and Gomez radiates that mantra.

“Being here has been a great experience, my family and I really love it here. This has been one of, if not my, favorite place to play and live,” Gomez’s wife Jeanette tells us as she switches between English and Spanish without skipping a beat. “Aaron tells me all the time about the connection between all the players that he hasn’t seen in other teams. Here on this team, we are more of a family than we have felt in other places.” The shy and reserved Gomez gets a playful elbow from his wife as they go back and forth. She teases him and tells us that she is helping him come out of his shell a bit more. His two young sons watch on as their parents discuss everything that has led their family to this exact moment in time.

In 99 percent of other professions, our families rarely see us while we are working. An accountant doesn’t invite their friends and family to watch them during tax season, pounding away on their calculator and cheering them on as they find those refunds. Sports are unique in that way, your career is a spectacle, your family and loved ones literally watch you labor. Every pass, every touch and every moment is in plain view. “It’s important for me, I really enjoy getting to play in front of my family, and to set a great example for my kids,” finishes Gomez.

A week after this interview, Gomez would go on to score the game-winning goal in the 91st minute to boost Locomotive up the standings and into a deeper playoff position. When asked about that match, he echoed his persona, “we fight until the end.” The fight continues as Gomez and Locomotive take on Fresno at home, battling to get three points and pursue their playoff dreams.