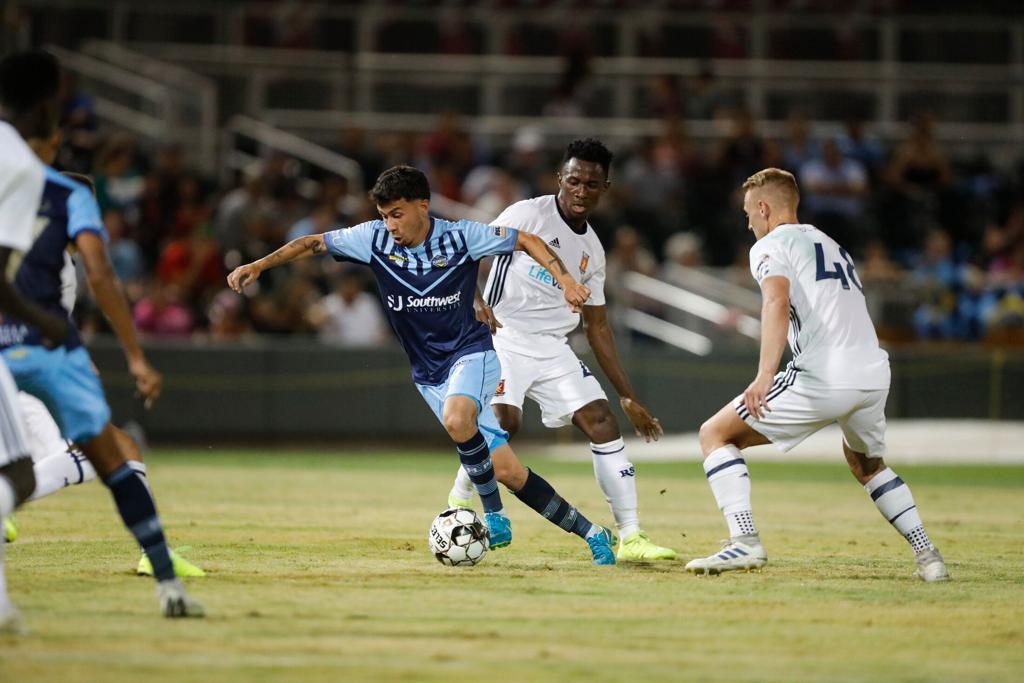 EL PASO – July 20, 2019 – El Paso Locomotive FC displayed a dominating performance against Real Monarchs whose five-game winning streak was snapped tonight. The night would end in a nil-nil draw in front if 6,000 flag waving fans. Locomotive out-possessed Monarchs 66 to 34 percent and completed 91 percent of their 575 passes. The El Paso backline also held the Monarchs to a single shot on target that was easily controlled by backup goal keeper Jermaine Fordah.

“That was a phenomenal effort from the guys. You don’t see USL games like that. We owned the possession. We value the process and when you play like that you can’t be disappointed,” said Coach Mark Lowry after tonight’s draw.

Newcomer Sebastian Velasquez saw his Locomotive debut this evening and played the full 90 minutes. The elusive midfielder would finish the night with three shots (two being blocked) and completed 92 percent of his passes.

“He’s class man. He unlocks defenses, he has that different level and we have been lacking that. We saw tonight the quality that he is going to bring to the table,” said Lowry

El Paso takes to the road to face rival New Mexico United on Wednesday, July 31st. Fans can catch the action at the Official Pub Club Watch Party at The Palomino Tavern.

El Paso Locomotive FC plays their next match at home on Saturday, August 3rd against Portland Timbers 2. Season Ticket Memberships, Group Tickets, and Individual Match Tickets can be purchased at https://www.eplocomotivefc.com/ticket or by calling 915-235-GOAL!