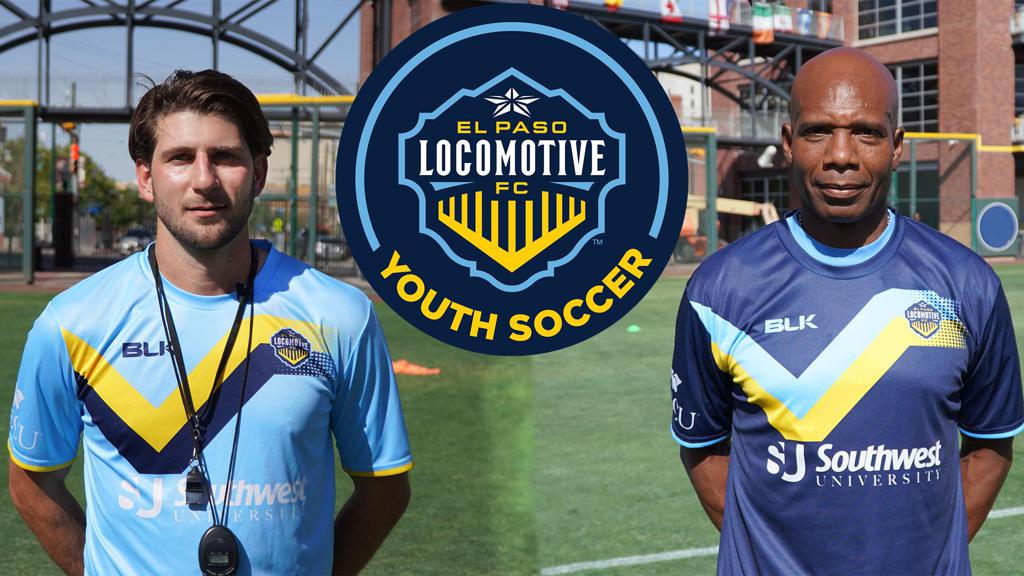 Stagnation is the quickest way to fail. An unwillingness to learn and adapt is the fast-track to a place that is hard to come back from. The Locomotive coaching staff does not put up with staying put in a physical or mental capacity, for starters, a train moves forward. This train is continuing its journey onward, picking up a few new passengers along the way.

El Paso Locomotive FC has nearly completed their fourth month of USL Championship action and has been climbing up the standings. The main focus of the club has been the 11 men on the field and the 15 matches that have been played thus far. Look a little closer though and you will see the rapid development on the youth side and how the club aims to provide the highest level of coaching to the sport’s future stars. Bob Bigney has spearheaded the operation since day one. Bigney is a big name in the youth soccer world, bringing with him 30 years of coaching experience at the youth, high school, college and professional levels. He holds his US Soccer ‘A’ License, his National Youth License and is an instructor for US Soccer. Bigney has poured his heart, soul, and expertise into developing the Borderland region’s next generation, luckily for him, he now has some reinforcements.

Joining the #CrazyTrain is Matt Williams, most previously of the Jacksonville Armada (a familiar name to those following along). Making the 1,613.3-mile trek west, Williams is set to hop aboard the professional team and the youth side. Like many coaches, Williams’ passion for teaching the game came from his time playing the game. His collegiate career saw him begin his journey at the University of North Florida and wrap up his eligibility at University of West Florida in Pensacola. He knew he had another level of playing within him and had stints in the USL in Maryland and in New Zealand where he wore the black and yellow of Team Wellington.

“Having that experience and playing overseas has really helped me relate to our guys in El Paso. I can tell them ‘I know how you are feeling. I’ve been there before,’” says Williams as he recounts his story that led him to the Southwest. After some time playing the game, he decided that coaching would be his next fit. Williams went back to finish his degree but the hunger to stay close to the game could not be appeased. Out of collegiate eligibility, coaching was the next best thing.  “I was so close to finishing my degree. It wasn’t what I wanted to do in the long run, but I was so close and didn’t want to start over,” said Williams.  “When I was supposed to be studying for engineering, I found myself watching videos on training sessions and it clicked. I found what I wanted to do forever.”

He caught the bug and the world of coaching full-time opened in front of him. Not many people are fortunate to find something they love and turn it into a career but talking with Williams you can see the passion that rings throughout the Locomotive camp. “It’s all process oriented. Focus on the process and everything else will follow. As I coach, that’s what I have really worked on myself. Getting organized and making sure that I’m doing the best I can. Always reflecting and seeing how I can improve,” states Williams who would go on to receive his US Soccer ‘A’ License – one of the top coaching licenses in this country, making the duo of Bigney and Williams a lethal combo. Williams’ role with the Locomotive pro team is that of assistant coach with a focus on video analysis for players during training and matches. Here in El Paso he is also returning to his Jacksonville roots and playing a key role in the youth development aspect; already assisting Bigney with all aspects of developing the Locomotive FC Youth Soccer Club and the Locomotive U-17 Select Squad who are playing in the prestigious Copa Bravos in Juarez this week.

Getting his feet wet in the youth system of Armada, Williams is prepared to make his impact felt on the senior and youth coaching unit. Where Williams brings a fresh youthfulness and technological savviness, Bigney and another new member of the Locos bring a wealth of experience and wisdom. If you have stepped foot on a pitch in the Sun City, the name Guillermo ‘Memo’ Macfarlane is as well-known as a certain Green Bay Packers running back.

Coach Memo as he is more frequently dubbed (if you knew him in his playing days you could swap it for “La Pantera”) has left an imprint on the youth soccer community as large as his smile and as genuine as his laugh. Coach Memo has devoted more than half of his life to the beautiful game. “I didn’t start playing until I was 18 actually. Before that it was football, baseball, track, and other sports,” says Memo. “Actually, it was my move to El Paso that got me into soccer. When I transferred from San Antonio it was my only option.” The transition into the beautiful game was one that led Coach Memo to a professional playing career and set him on track to becoming one of the most respected coaches in this region.

Memo began playing at the University of Texas at El Paso on the club team in the late 80’s. Whilst with the Miners, he was an NCCSA first team All American in 1991 and 1994. Memo also played with the El Paso Patriots for years, off again and on again including the 1995 US Open Cup final vs the Richmond Kickers which was held in the Sun City. Memo was named a Top Defender by USA Today leading into the match but unfortunately, El Paso would fall in penalties and not lift the Dewar Cup. Memo would go on to play two seasons with the Wichita Wings in the Major Indoor Soccer League as well.

“Watching the kids develop and when they finally get something and their eyes light up. That’s what got me into it,” Memo tells me when I ask him “why coaching?” From the time he took his first step onto the field as a player, Memo began coaching. Falling in love with what he, Williams, Bigney and the rest of the Locomotive coaching staff call “the process.” You may hear this phrase echo from team to team regardless of sport. Here in El Paso, more importantly, EP Locomotive, the process is everything and not just two words used to fill space. “I always want to learn and get better, not for myself, but for the kids. The game changes fairly quickly and you have to keep up,” he tells me as we begin wrapping up the interview.

The constant thread that connects every member of the coaching unit, regardless if the focus is the youth side or the senior squad is developing not only athletes, but people. “It’s all about relationships. I want to get to know the person because the player will develop from that,” says Williams. “For me, it’s all about the kids. What can I do as a coach to help them and get their best from them? That’s what it’s all about,” echoes Memo. This continued investment in the youth development not only pays dividends now but looks to reshape the soccer landscape in the region. Creating opportunity and a future for the next generation.