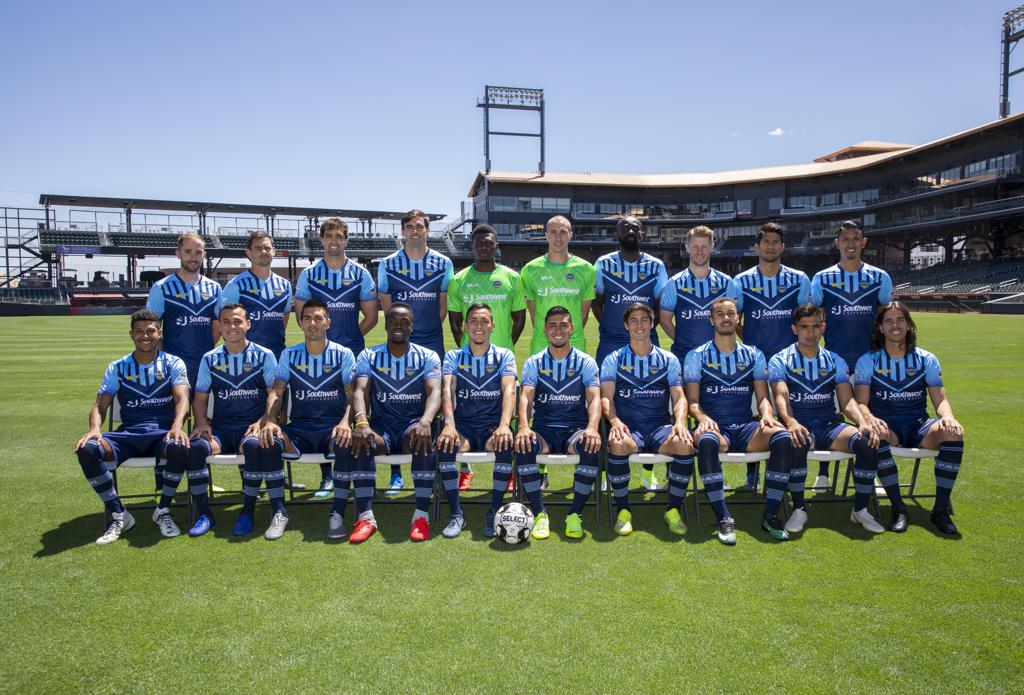 They were just little boys, born in the mid-1990s in and around El Paso. They grew up chasing the ball, dreaming dreams, living the joy of the beautiful game.

They chased the ball each day, laughing with the sheer fun of it all, racing against the dying light – trying to get off one more kick, one more run, one more goal – before darkness slipped in and put a halt to the fun until the next day.

Sure, they had their dreams.

There are four of them and all their dreams had something to do with playing the game they loved for as long as they possibly could, to retain that little boy joy of playing another day.

Omar Salgado and Louis “Chapa” Herrera grew up playing in El Paso. Memo Diaz grew up chasing the beautiful ball in Anthony, NM. And Aaron Gomez grew up just across the river in Juarez, chasing that same ball, dreaming those same dreams.

Not one of them, though, dreamed of the chance to play in front of thousands of passionate fans in a beautiful new downtown stadium right here in their own back yard.

Sometimes, just sometimes, reality can be even more grand than dreams.

The team is coming off last Saturday’s 2-1 decision at Tacoma and is now unbeaten in seven straight league matches. They will return home Saturday night to take on LA Galaxy II at 7:30 p.m. smack in the Sun City’s downtown in Southwest University Park.

The Locomotive’s local four came from so close together but each has a distinct and separate journey of his own.

Salgado, of course, is the golden boy of the group. He grew up in El Paso but played mostly for Guadalajara’s famed Chivas club until the Vancouver Whitecaps made him the number one draft choice of the entire MSL in 2011.

Laughing, the 25-year-old Salgado said, “I went to Cathedral … for about a month. That’s when I went to Guadalajara to play for Chivas. I played there for about a year-and-a-half, until the draft in 2011.

“I played there in Vancouver for four years,” the 6-foot-4 forward said. “Getting drafted like that was awesome and I really had fun for a couple of years. I grew up watching the MLS but I never dreamed it would happen for me at 17.”

Salgado was then transferred to Monterrey and was loaned out a couple of times – once to South Korea (“Not for me,” he said, laughing again.) and once to Colombia.

But injuries are frequently part of every athlete’s journey and Salgado has had more than his share.

“I tore my ACL in Colombia,” he said. “I broke the same bone in the same foot five times while I was in Vancouver.”

The foot injuries cost him roughly two years and the knee injury erased another year from his soccer journey.

Intelligent, articulate, Salgado found time for his education as he chased his soccer dreams. He graduated from Northeastern University in Boston with a degree in political science and then followed that with a Master’s degree from Northeastern, picking up his graduate degree in International Relations and Economy.

But soccer is still the goal for now.

Salgado was the first player the Locomotive signed and they loaned him to Las Vegas last year until the local team actually started playing games.

“It’s been awesome playing here where your family and friends can see you play,” Salgado said. “This is a great city; growing. And the stadium is beautiful.”

Herrera’s journey was almost the opposite of the trail traveled by Salgado. The 23-year-old grew up loving the game but, after his high school career ended, he thought maybe any future in soccer had faded into the rear-view mirror, too.

“I played at Bel Air and for Texas Fire and I’ve always loved the game,” he said. “But after I graduated from high school, I didn’t have any college offers. I had a young son and I just got a job working construction.”

But these young boys who have grown into young men do not step casually away from dreams. The joy of the game, the lure of the ball, the pull of the beautiful game is simply too much.

“I still played on weekends and played in some tournaments,” he said. “We played in a tournament in San Diego and one in Dallas. We played one here in El Paso and that’s where the Locomotive saw me and asked me to come for a tryout.”

Pausing, reflecting on the days gone by, Herrera said, “I thought I would never have a chance. I thought it was over. I couldn’t believe I had the opportunity to play professional soccer. And I can’t believe I can play here. This whole atmosphere feels so great.”

Diaz followed yet another path, a path through education and school soccer

He played at Gadsden High and was named the 2013-14 Gatorade New Mexico Boys Soccer Player of the Year. He scored 27 goals and had 19 assists for 73 points during that special senior season.

Still, he was not on the national radar. He took a scholarship to Yavapai Junior College in Arizona and once again excelled. He was named NJCAA All-Region and helped Yavapai reach a top five national finish.

That got him a scholarship to UNLV and he performed well there, too.

“I graduated from UNLV in December,” the 23-year-old Diaz said. “I loved soccer but I just started going to school, wanting to use soccer to pay for my education. I got my degree in criminal justice.”

Of course, dreams die hard and as his education was drifting toward a finish, he continued to think about that ball, that game, all that joy.

“After I got to UNLV, toward the end, I started thinking about playing pro soccer,” he said, smiling. “I was able to play for the NPSL in Midland and keep it going.  And now I’m here. This atmosphere is so much fun. Having this kind of atmosphere, this kind of support from the city, from our family and our friends is amazing.”

Gomez, now 24, grew up just a strong kick across the river, chasing that ball, loving that same game. He played all over Juarez growing up but moved south to chase the ball at an early age.

“I grew up playing in the city but I left at 13 to play in Pachuca,” Gomez said. “I played for the academy team there until I was 21. Then I transferred back to Juarez to play for the Bravos (of FC Juarez).”

These four young men – two from El Paso, one from the outskirts in New Mexico and one from just across the river in Juarez – grew up the same, playing the same game, laughing at the joy of the game and dreaming of playing this game far into forever.

They began in almost the same spot. Their journeys have taken them in far different directions. But those same dreams have brought them all back home, living those dreams that drifted in when their heads hit the pillow each night as young boys, playing the game they have loved for a lifetime.

Their visions for the future are – not surprisingly – almost identical.

Salgado said, “I’d like to stay in this city, with this club for many years. I’d like to play as long as I can.”

Herrera said, “First, I’d like to work my way into getting more minutes here. But, overall, I want to try and play the most years I can.”

Diaz said, “I would like to work myself into a bigger part on the team and, yes, I’d like to play as long as I can.”

Salgado laughed and added, “I want to play as long as I can but after this I want to go to law school and then have a political career.”

They grew up so close together and they each took their own journey – a journey with a soccer ball as magnet. For some, it seemed inevitable and for some it seemed impossible.

But games teach athletes one thing. Never give up. Magic might be just around the corner. And if you give up, well, you might just walk away before the magic tip-toes into your life.

They were just little boys not so long ago, growing up chasing the same ball, dreaming the same dreams, living and laughing and loving the joy of the beautiful game.