From the Broadcast Booth 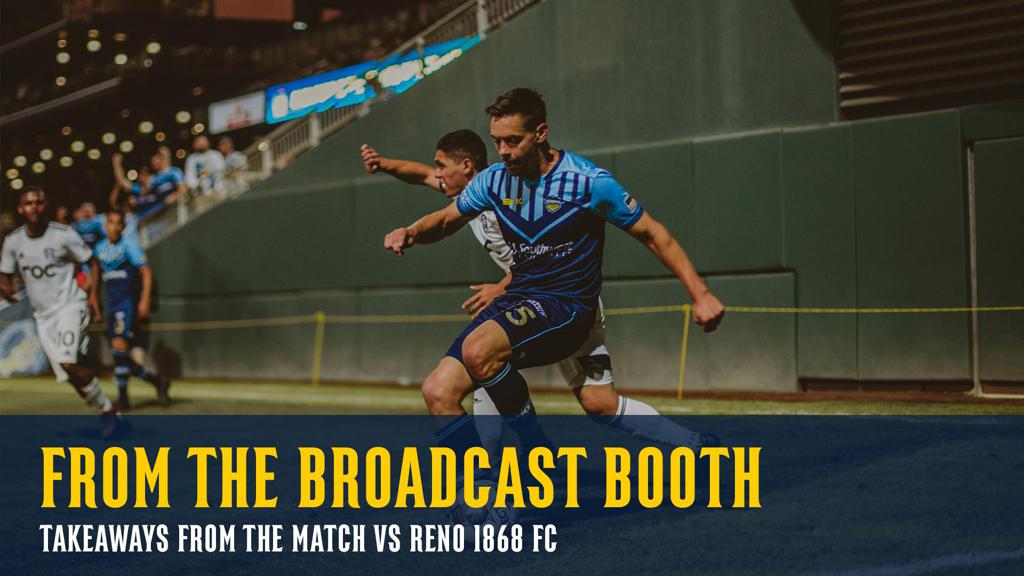 El Paso Locomotive FC is headed north this weekend to take on Colorado Springs Switchbacks. Locomotive is coming off a dominating performance against Reno 1868 where El Paso held Reno to only two shots on target and 40 percent possession. Instead of dipping our toes in, Duke Keith and Michael Balogun of our broadcast team dive in head first to breakdown the Locomotive performance.

Duke Keith has been an esteemed member of the El Paso media scene for more than 30 years. He has served in various roles across multiple organizations, including play-by-play for ESPN, the El Paso Patriots, El Paso Rhinos, and UTEP Athletics. Michael Balogun played NCAA D1 soccer for the University of Akron, one of the most highly regarded programs in the country. He also spent time with the US Youth National Team and had stints with various professional clubs. The wealth of soccer knowledge and expertise they both bring to the table is extraordinary.

In their own words, the two members of the Locomotive broadcast unit give us their thoughts:

As solid a 90 minutes from Locomotive as I think we’ve seen outside of the match against Orange County.

Honestly, after Contreras’ penalty, I thought Reno 1868 would pour it on. Watching other matches around the league, I expected some wackiness. But that attacking wave just never materialized. It got broken up on the rocks! Outside of some too-close free kicks and a couple of excellent long crosses from Brent Richards, there was nothing. Reno’s target man, Brian Brown, barely touched the ball the entire game and 1868’s designated pest, Corey Hertzog, was all chased out and was subbed at the end.

I’m by no means an expert, but what that tells me is that this was a thorough, professional, steely performance from Mark Lowry’s side. They may walk a bit of a tightrope while the offense sorts itself, but there is no desperation, no exasperation. No one forces anything. You know Omar Salgado and Jerome Kiesewetter –– among others –– are just aching to score, but their movement remains measured.

This is a TEAM and it seems to me that, the players have bought all the way into the system.

Defense Wins Championships - Not jumping the gun or saying the team will hoist the trophy at the end of the year but it's important to note Logan Ketterer is tied for in the league with four shutouts out of seven games. Only one other keeper (Diego Restrepo - Austin Bold FC) has that many clean sheets in seven games. Impressive how good he is with his distribution in the buildup, he's not called on to make many saves during the game but comes up big when needed.

Goals Goals Goals - Only a matter of time before the team starts ripping the reward of Mark's possession style. Too much fire power between Kiesewetter, Salgado and Gebhard not to start banging in goals.

Health - Yuma was solid overall in the game but was exposed 1 v 1 on a few occasions against average attacking players. Against more dangerous attackers like Santi Moar (New Mexico United) or Shane Malcolm (CO Switchbacks) and Akiel Barrett (Tulsa) those moments could turn costly. Bryam's return will help sure up the defense. Also, will give defensive balance having two natural holding midfielders playing next to each other (Richie Ryan & Yuma)

Consistency - No team in the Western Conference is able to put together more than a two-game winning streak. The team needs to build on the past weekend going into the CO Switchbacks game before they return home for three games (2 USL Championship,1 Open Cup).

The breakdown and thoughts from the two members of our team will be put on display this Saturday when Locomotive take the pitch in Colorado Springs. Who will open up the scoring sheet first? El Paso icon Omar Salgado? Or will the esteemed Bundesliga striker Jerome Kiesewetter be added to the growing list of Locomotive players with a goal? After Colorado, the boys head home to face rival New Mexico United, which is already gearing itself up to be a can’t miss match. How will El Paso adapt to the offensive prowess of NM and will the Locomotive defense be United’s kryptonite?